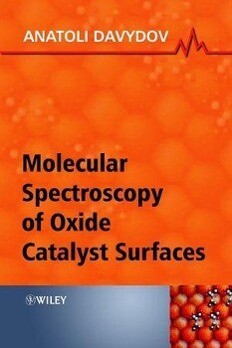 As in the study of transition metal complexes in solution, molecular spectroscopic methods - principally the infrared, ultraviolet/visible and electron spin resonance spectroscopies - have played key roles in establishing the concepts of coordination chemistry occurring at the surfaces of solids. This book describes the development of the principals of coordination chemistry of oxide surfaces using analyses of data obtained by these methods. The nature, properties, concentration of the surface adsorption centers and their influence on the character of interaction with different molecules are investigated.The book commences with an account of the basic theoretical principles and experimental techniques of the various spectroscopy methods, with special attention devoted to in situ measurements where the oxide or catalyst sample is in contact with the adsorbate or the reactant. A detailed account is presented of the methods for characterizing the oxidation state and degree of coordination of surface cations and oxygen anions by the adsorption of probe molecules. The complexation of many inorganic, organometallic and organic molecules with different oxide systems is critically examined, and a classification of formed surface compounds, based on the interaction with definite type of adsorption centers, is given. Possible mechanisms of numerous catalytic reactions, including the transformation of organic molecules over acidic catalysts via the carboionic mechanism, are discussed using the spectroscopic identifications of reaction intermediates. A comprehensive analysis of the literature on the interpretation of the spectra of surface compounds on oxides is presented.This highly illustrated and extensively referenced volume is intended for specialists working in the fields of surface physical chemistry, surface and materials sciences, and adsorption phenomena and is essential reading for those involved in the heterogeneous catalysis by transition metal-oxides.

Determination of the nature of surface sites and their chemical properties using the adsorption of simple molecules.

3. Study of cation states by DRES and FT-IR spectroscopies of the probe molecules.

Effects of the state of adsorption sites on the stretching frequencies of adsorbed Carbon monoxide and Nitrous oxide and the problem of detecting the states of cations in oxide catalyst surfaces.

Interaction with simple acids and bases.

Thermal stability of molybdenum compounds, decomposition mechanism and the role of modifiers.

Complexation of Aryls and aryl halides.

Complexation of Aldehyde and ketone.

6. The mechanisms of heterogeneous catalytic reactions.

Reactions with participation of hydrocarbons.

Transformations of aldehydes and ketones.