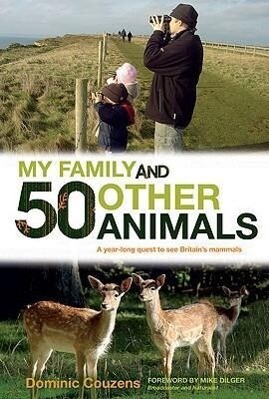 My Family and 50 Other Animals: A Year-Long Quest Tor See Britain's Mammals

von Dominic Couzens
Sprache: Englisch.
Buch (gebunden)
Britain is home to almost 100 species of mammals. Many of them are nocturnal, almost all are difficult to see, and most people--even very keen natural history enthusiasts--struggle to see more than about 10 a year--rabbits, foxes, a few deer, perhaps … weiterlesen
Geschenk per Mail versenden
Buch (gebunden)

Britain is home to almost 100 species of mammals. Many of them are nocturnal, almost all are difficult to see, and most people--even very keen natural history enthusiasts--struggle to see more than about 10 a year--rabbits, foxes, a few deer, perhaps. So can one ordinary young family manage 50 in just one year?

January - "Coming, ready or not!": Our first efforts at spotting some mammals (squirrels and rabbits); February - Hanging horseshoes and Water Rats: Two unusual forays after tricky finds; March - The Fox and the Grapes: Britain's favourite carnivores, Badger and Fox; April - It was here just yesterday: In search of the Otter, mainly looking at lots of empty water; the Stoat - a truly scary hunter; May - Scotland: Tales of seasickness, near misses and eventual triumph (featuring Pine Martens, voles, whales - and Wallabies!); June - in the traps: The delights of catching small mammals in the garden; July - Sick and stranded: A beached whale causes distress, but Hedgehogs save the day; August - Sleepy time: on the trail of Dormice; September - Rare bats and setbacks: a stressful introduction to "bat politics"; October - North and East: In search of Water Deer from China, Mountain Hare and Deer; November/ December: Dolphins, Moles, Weasels... and the magic number!

Dominic Couzens is a writer and broadcaster on wildlife and natural history. He writes regularly for magazines such as BBC Wildlife, BBC Gardener's World, the National Trust magazine and Bird Watching, and has written a variety of books including 100 Birds to See Before You Die, The Secret Lives of Garden Birds and The Secret Lives of Garden. He lives in Dorset with his wife and children, and his website is www.birdwords.co.uk Mike Dilger is an ecologist, author, presenter, director and tour leader. He has presented a wide range of programmes on TV and radio, including "Nature's Top 40", "The Nature of Great Britain"; "Cbeebies Autumnwatch & Springwatch", "Hands on Nature", and Radio 4's "Extreme Britain". He is also a reporter for BBC's "The ONE Show" and "Inside Out", the author of Nature's Calendar and Nature's Top 40: Britain's Best Wildlife, and writes for publications including BBC Wildlife Magazine and WWT Waterlife.