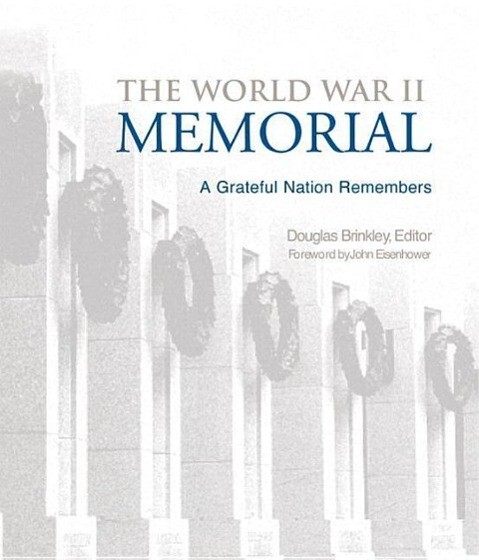 von Douglas Brinkley
Sprache: Englisch.
Buch (gebunden)
Assuming its rightful place of honor on the National Mall between the Lincoln Memorial and the Washington Monument, the World War II Memorial is an eloquent and moving tribute to "The Greatest Generation.” Sixteen million Americans served in the arme … weiterlesen
Geschenk per Mail versenden
Buch (gebunden)

Assuming its rightful place of honor on the National Mall between the Lincoln Memorial and the Washington Monument, the World War II Memorial is an eloquent and moving tribute to "The Greatest Generation.” Sixteen million Americans served in the armed forces—more than 400,000 gave their lives—and millions supported the war effort from home, all in the name of protecting that which we, as Americans, hold most dear: freedom.

The World War II Memorial, published in conjunction with the dedication of this long-overdue memorial, commemorates the everyday Americans who in countless ways rose up to defeat one of history's gravest threats to freedom. Veterans—including George H.W. Bush, Sen. Daniel Inouye, former senators Bob Dole and George McGovern, Yogi Berra, and many, many others—contribute their own personal stories while leading historians look at the military campaigns of the war. The memorial's architect and its sculptor provide insights into how it symbolizes the fortitude and perseverance of a generation, and the exclusive photographs present the memorial through all stages of construction. Fittingly, this historic tribute falls in the 60th anniversary year of D-Day, a time when our nation once again reflects on its greatest sacrifice and greatest victory in the name of freedom.

Douglas Brinkley is the Director of the Eisenhower Center for American Studies at the University of New Orleans and author of Tour of Duty: John Kerry and the Vietnam War.

"A fine companion to the PBS documentary. . . . Well-chosen and well-reproduced period phtographs are here in generous quantity."- Publishers Weekly "The book's purpose, editor Brinkley indicates, is similar to the monument's: to induce those without living memory of the war to appreciate the conflict's enormous effect on America. Thus the memorial itself has an accessible classical design, with arches, columns, bas-relief bronzes, and inscriptions. The book is similarly approachable, with plenty of photographs of the memorial and of the war. . . . Excellent as commemoration and an able introduction."- Booklist "An excellent addition to the literature."- Library Journal
Kunden, die diesen Artikel gekauft haben, kauften auch
Schreiben Sie eine Rezension