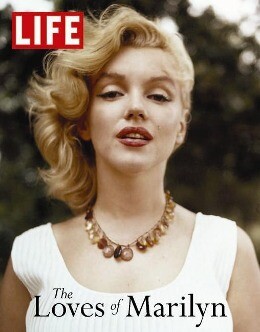 LIFE The Loves of Marilyn

von Editors Of Life Magazine
Illustrations, unspecified. Sprache: Englisch.
Buch (gebunden)
"LIFE The Loves of Marilyn" is the definitive book on Marilyn Monroe's romantic past, told through rare and iconic photography as well as captivating narrative.Central to Marilyn's mystique has always been her love life - filled with rumors, romantic … weiterlesen
Geschenk per Mail versenden
Buch (gebunden)

"LIFE The Loves of Marilyn" is the definitive book on Marilyn Monroe's romantic past, told through rare and iconic photography as well as captivating narrative.Central to Marilyn's mystique has always been her love life - filled with rumors, romantic entanglements and multiple marriages, all before she died prematurely at the age of 36. Within its pages, LIFE captured everything from her flirtations with co-stars to her genuine affection for her husbands to her tragic divorces. All three of her marriages (two famously to Joe DiMaggio and Arthur Miller), ended in divorce, and she was rumored to have multiple affairs, including one with JFK.LIFE was in its heyday in the 1950's and 60's, when Marilyn was at the peak of her fame. In ten years (between 1952 and 1962) LIFE put her on the cover six times. Had she lived, she might well have challenged Liz Taylor's supremacy and her close connection to LIFE magazine. From famous pictures such as Marilyn singing "Happy Birthday Mr. President" to John F. Kennedy to lesser known shots such as those from her divorce proceedings with Joe DiMaggio, this book provides fans of Marilyn Monroe with a definitive summary of her many romances, glamorous life, and tragic end.

James Ireland Baker is the author of the sucessfull book The Empty Glass, about the conspiracy behind Marilyn Monroe's death. He also contributed to LIFE's The Day Kennedy Died. Previously, he was executive editor of "Conde Nast Traveler." Before that, he was development editor at Time Inc. He has also worked at "Real Simple, Glamour," and" Us," and is a founding editor of "Time Out New York. "Baker lives in Westchester County, New York.The editors at LIFE vigorously carry on the traditions of excellence in photography, journalism and storytelling of and about our country and our world, which began with the founding of LIFE magazine in 1936 by editor and publisher Henry R. Luce. LIFE has published books on a broad range of subjects, including "New York Times" best-sellers "The Royal Wedding of Prince William and Kate Middleton "and "The American Journey of Barack Obama.""