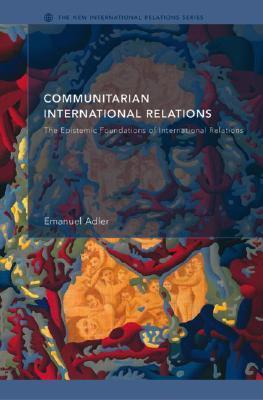 In Emanuel Adler's distinctive constructivist approach to international relations theory, international practices evolve in tandem with collective knowledge of the material and social worlds. This book - comprising a selection of his journal publications, a new introduction and three previously unpublished articles - points IR constructivism in a novel direction, characterized as 'communitarian'.
Adler's synthesis does not herald the end of the nation-state; nor does it suggest that agency is unimportant in international life. Rather, it argues that what mediates between individual and state agency and social structures are communities of practice, which are the wellspring and repositories of collective meanings and social practices. The concept of communities of practice casts new light on epistemic communities and security communities, helping to explain why certain ideas congeal into human practices and others do not, and which social mechanisms can facilitate the emergence of normatively better communities.

Emanuel Adler is Professor and Chair of Israeli Studies, University of Toronto and Associate Professor at the Hebrew University Israel. He has served as a research fellow at U.C. Berkeley and Harvard University, and has taught at U.C. Berkeley, U.C. Davis, and the University of Wisconsin. His area of expertise is the theory of International Relations and the relationship between knowledge and international change. In this context he has explored the development of epistemic communities and learning, the development of security communities, and the constructivist approach to the study of international relations.

"In this outstanding collection Emanuel Adler covers some of his most noteworthy and influential articles. A leading exponent of constructivist scholarship, Adler demonstrates the power of the synthetic approach to knowledge that he has articulated with great lucidity. Communitarian International Relations forms a seamless web with the life-long practice of Adler's brilliant career as scholar-teacher in Israel, Canada and the United States."
-Peter J. Katzenstein, Walter S. Carpenter Professor, Jr. of International Studies Cornell University
"In Communitarian International Relations, Emanuel Adler solidifies his reputation as one of our most innovative theorists of international relations. Ranging broadly over social, normative, political and analytic theory, this collection of new and previously published essays shows Adler at his best. Throughout the volume, but especially in a brilliantly argued introduction, he does no less than propose a bold double synthesis - of normative and analytic theory, and of micro- and macro-oriented social analysis - as the way forward for IR. For those with an interest in moving beyond the 'paradigm wars' and petty 'turf battles' that so often mark our discipline, this book is a must read..""
-Jeffrey T. Checkel, University of Oslo