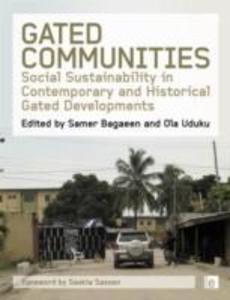 Samer Bagaeen is a senior lecturer at the University of Brighton where he leads the town planning programme. His work focuses on international megaprojects, the socio-historical roots of gated communities, sustainable urban form and the brownfield regeneration of former defence sites. He is Fellow of the Inter-University Seminar on Armed Forces and Society. Samer has lived in the Old City of Jerusalem where the traditional concepts of controlled access, community ownership and private space predate the contemporary gated enclave. Samer currently lives in a gated mews in Brighton but remains a keen community activist. Ola Uduku works at the School of Architecture at the Edinburgh College of Art. Her research interests include Investigating social infrastructure provision for minority communities in urban areas, Modern movement Architecture in West, Africa, and the effect of Gated communities on existing and future urban form in Global cities. She has lived in urban Lagos and Johannesburg, both known for their high levels of 'security-gating', and currently lives in a gated Mews development in Edinburgh, near the gates to the city's original walls.

'An excellent comparative study and much needed synthesis.' Anna Minton, writer and journalist, author of Ground Control (2009) 'Accessible and incredibly informative ... recommended to all those with an interest in developing a better understanding of gated communities.' Housing Studies 'Wide-ranging in case studies and its contributors' politics, this important collection reflects on one of the most critical debates now facing our urbanising world - how will we respond to the growing consumption of a fortified lifestyle by the urban affluent?' Rowland Atkinson, University of York, UK 'This book is a stimulating addition to a growing body of literature that investigates the global emergence of gated communities. Its distinctive contribution is to emphasise historical roots and continuities - in contrast to many commentaries on the subject that imply a uniformity of product and process. This is particularly important as we approach an economic era in which tried and tested explanations of 'gating' will be challenged. Gating, or more precisely, contractual neighbourhood government, will be one of the biggest challenges of twenty-first century urbanism. It offers new ways to manage long standing civic goods supply problems but it raises new equity and city-wide efficiency problems. These issues are not uniform; and understanding the history and culture of gating in specific contexts is the starting point for compelling analysis and wise counsel.' Chris Webster, Cardiff University, UK 'By focusing on the historical and cross cultural foundations of gated communities, this volume adds a global dimension to US based theorizing of urban gating as a sustainable community design form. Including academics, planners and sustainability activists the authors explore both sides of the gating question and offer alternative readings of the importance of codes, legal governance and community access in contemporary urban planning.' Setha Low, Professor of Anthropology, Geography, Environmental Psychology and Women's Studies at the Graduate Center of the City University of New York 'This collection of articles differs from the mainstream literature on gated communities, owing to its ambitious geographic coverage, long term historic timeframe, and authors from the countries where the case studies have been selected.' Urban Design, Issue 115, 2010