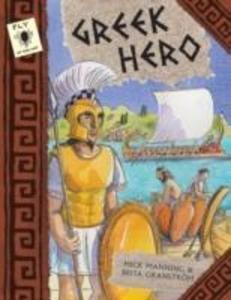 illustrations. Sprache: Englisch.
Buch (gebunden)
Agathon the Greek soldier returns home from battle, meeting lots of interesting characters from classical Greece along the way. Part of the Fly on the Wall series.

Agathon the Greek soldier returns home from battle, meeting lots of interesting characters from classical Greece along the way. Part of the Fly on the Wall series.

This book and others in the series deserve to be placed with the best history books for young learners as they give such a strong sense of what it might have been like to have lived at a particular time in history. They also show that your lifestyle depends very much on which particular social or work group you belong to. The narrative or story form captures the interest of young readers and provides a strong context for learning about lifestyle and customs at a particular time. -- Margaret Mallet English Association Magazine The illustrations are lively, cheerful and bright with scribbled notes on and around them to provide further information. The sketchbook format has an energy and a warmth which really brings history to life. Books for Keeps A perfect fusion of words and images. The text features a cast of characters and is animated with dierct speech, while the illustrations are dynamic and expressive. This is a super antidote to the flat presentation of much non-fiction that fails to engage at an emotional level. Guardian Best New Children's Books Supplement