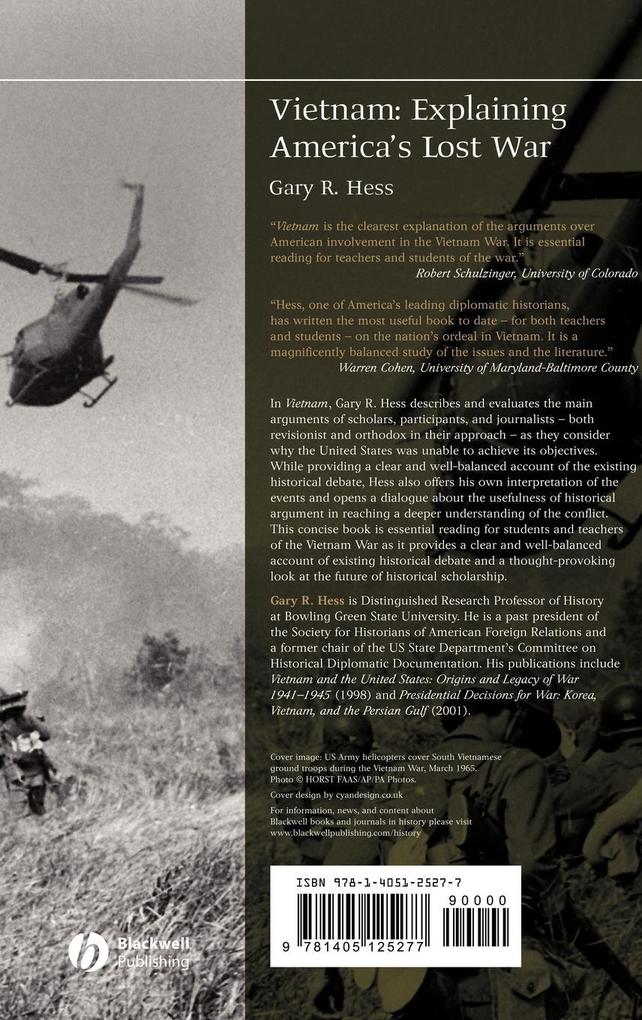 von Hess
HC gerader Rücken kaschiert. Sprache: Englisch.
Buch (gebunden)
The involvement of the United States in the Vietnam War has been the most polarizing issue within post-war American history. It was divisive at the time, both domestically and internationally, and debates continue to the present day.
Geschenk per Mail versenden
Buch (gebunden)

In
Vietnam , Gary R. Hess describes and evaluates the main arguments of scholars, participants, and journalists, both revisionist and orthodox in their approach, as they try to answer fundamental questions of the Vietnam War.
Clearly examines the historiography of the Vietnam War
Questions whether the Vietnam War was lost due to poor strategy and leadership, or was inherently doomed to failure
Includes a bibliographic essay which complements the literature discussed in the text

1 From the Streets to the Books: The Origins of an Enduring Debate 1

6 The Media and the War: Shaping or Reflecting Public Opinion? 133

7 The Tet Offensive: A decisive American Victory or a Prolongation of Stalemate? 154

8 Nixon-Kissinger and the Ending of the War; A "Lost Victory" or "Neither Peace nor Honor?" 179

Gary R. Hess is Distinguished Research Professor of History at Bowling Green State University. He is a past president of the Society for Historians of American Foreign Relations and a former chair of the U.S. State Department's Committee on Historical Diplomatic Documentation. His publications include Vietnam and the United States: Origins and Legacy of War 1941-1945 (1998) and Presidential Decisions for War: Korea, Vietnam, and the Persian Gulf (2001).

"This is a book one will wish to assign to students: it lays out, with enviable clarity, what is at stake, what evidence exists for reaching a judgment, what various historians have concluded on the basis of the evidence they use and/or ignore, and Hess s own position on the matter. Because he is an honest historian, Hess does not pretend to be neutral." ( International History Review , June 2009)
"[Hess] has simply provided the best general overview of the literature on the Vietnam War that has been written to date." ( Review of Politics , March 2009)

A Choice Outstanding Academic Title of the Year

"Gary Hess's new book is a survey of the scholarship on the Vietnam War which pits this revisionist historiography (the so-called 'winnable' war tradition) against the more numerous orthodox historiography (the 'unwinnable' war tradition) ... .[The book is] an enormously stimulating volume which usefully organises the literature on thematic lines and clarifies the battle lines between the orthodox and revisionist schools." ( Reviews in History , January 2009)