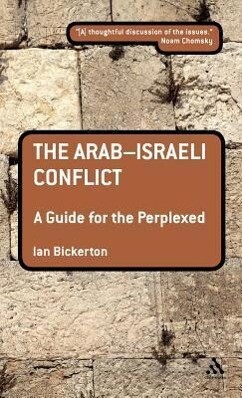 von Ian J. Bickerton
A Guide for the Perplexed. maps. Sprache: Englisch.
Buch (gebunden)
The Guide aims to demystify and clarify one of the key conflicts of our time, explaining who, what, where, and why in a balanced manner. >

A Guide for the Perplexed.
maps.
Sprache: Englisch.

The Guide aims to demystify and clarify one of the key conflicts of our time, explaining who, what, where, and why in a balanced manner. >

Acknowledgements; List of Maps; Preface; Introduction; 1. What is the Arab-Israeli Conflict?; 2. The Situation, 2009-2011; 3. What are the Core Issues?; 4. From The Oslo Accords of 1993 to 2005; 5. The Media, Perplexity and the Conflict; 6. The United States and the Conflict; 7. Palestinian Refugees, the Right of Return and Israel's Security; 8. Lebanon and the Conflict; 9. The 2008-09 Israel-Gaza War; Conclusion; Appendix One: Some Basic Facts; Appendix Two: Some key figures; Appendix Three: The Peace Process Bibliography; Index.

Ian Bickerton is Visiting Senior Research Fellow at the University of New South Wales, Australia. He has taught the History of the Arab-Israeli conflict for thirty five years, in various institutions, including Pomona College, CA, the University of Missouri-Kansas City, the University of California-Santa Barbara. He has also been visiting scholar at the Johns Hopkins School of Advanced International Studies and the Oxford University Centre of Hebrew and Jewish Studies.

"The Israel-Palestine conflict is often depicted as intractable, close to hopeless. There are many reasons to suppose that that is far from true. Ian Bickerton s thoughtful discussion of the issues should help to reach a clearer understanding of just what is at stake, and what we can do to bring about a resolution that will respect the demands of justice, and convert antagonism to cooperation." - Noam Chomsky, Professor (retired), MIT.