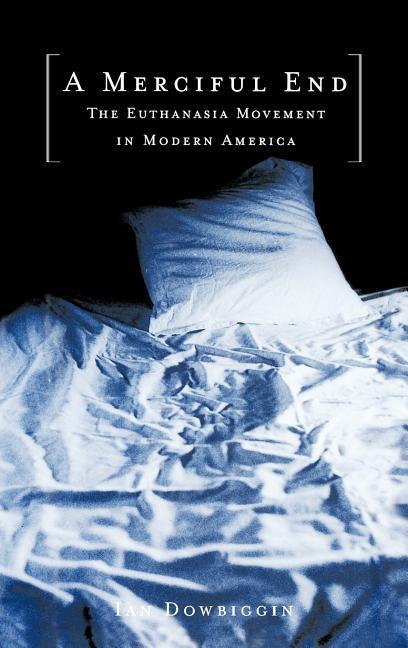 von Ian (Professor of History, Professor of History, University of Prince Edward Isl (…)
The Euthanasia Movement in Modern America. 10 halftones. Sprache: Englisch.
Buch (gebunden)
While it may seem that debates over euthanasia began with Jack Kervorkian, the practice of mercy killing extends back to Ancient Greece and beyond. In America, the debate has raged for well over a century.
Now, in A Merciful End, Ian Dowbiggin offer … weiterlesen
Geschenk per Mail versenden
Buch (gebunden)

While it may seem that debates over euthanasia began with Jack Kervorkian, the practice of mercy killing extends back to Ancient Greece and beyond. In America, the debate has raged for well over a century.
Now, in A Merciful End, Ian Dowbiggin offers the first full-scale historical account of one of the most controversial reform movements in America. Drawing on unprecedented access to the archives of the Euthanasia Society of America, interviews with important figures in the movement today, and
flashpoint cases such as the tragic fate of Karen Ann Quinlan, Dowbiggin tells the dramatic story of the men and women who struggled throughout the twentieth century to change the nation's attitude--and its laws--regarding mercy killing. In tracing the history of the euthanasia movement, he
documents its intersection with other progressive social causes: women's suffrage, birth control, abortion rights, as well as its uneasy pre-WWII alliance with eugenics. Such links brought euthanasia activists into fierce conflict with Judeo-Christian institutions who worried that "the right to die"
might become a "duty to die." Indeed, Dowbiggin argues that by joining a sometimes overzealous quest to maximize human freedom with a desire to "improve" society, the euthanasia movement has been dogged by the fear that mercy killing could be extended to persons with disabilities, handicapped
newborns, unconscious geriatric patients, lifelong criminals, and even the poor. Justified or not, such fears have stalled the movement, as more and more Americans now prefer better end-of-life care than wholesale changes in euthanasia laws.
For anyone trying to decide whether euthanasia offers a humanealternative to prolonged suffering or violates the "sanctity of life," A Merciful End provides fascinating and much-needed historical context.

Ian Dowbiggin is Professor of History at the University of Prince Edward Island.

... this fine wrought history will prove fascinating and rewarding reading not only for those involved in the euthanasia debate on all sides, but also for those studying the interrelationship between ethics, law and society. Medicine, Health Care and Philosophy: A European Journal, Vol 7, No 2