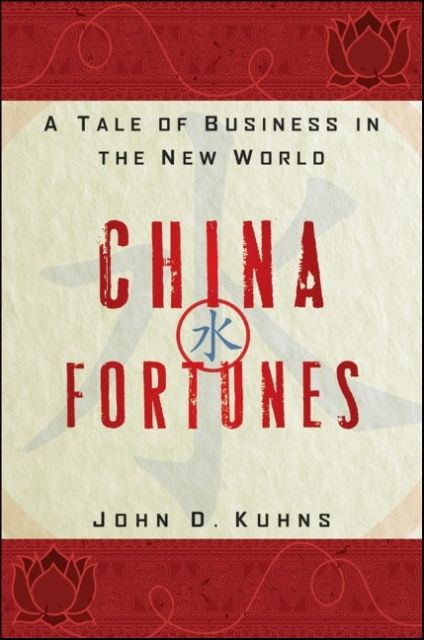 In the spirit of James Clavell, China Fortunes is a vast and sweeping story that addresses one of the hottest topics of the day, Chinese business.

In the spirit of James Clavell, China Fortunes is a vast and sweeping story that addresses one of the hottest topics of the day, Chinese business.

From a chaotic start in China to an embezzling Chinese company president on the run in Manilla, this book follows the monetary ups and downs of Jack Davis, an American financier drawn to the great Asian nation by the wealth of opportunities that accompanied the opening of the country to outsiders.

* Traces the beginnings of China's entry into the industrial age, as it hesitantly embraced capitalism while enthusiastically chased foreign dollars

Drawing on the experiences of one of the first western investment bankers to do business in China, this exciting tale brings you up close to the rising fortunes and risky business of the Middle Kingdom.

Chapter 1 Chinatown on the Rio Bravo.

Chapter 5 Mistakes Were Made.

Chapter 6 The Right Man for the Job.

Chapter 10 The Year of Living Dangerously.

Chapter 12 A Leopard and His Spots.

Chapter 15 A Date with A Monkey.

Chapter 17 Tell Me Something I Don't Know.

Chapter 19 The Worst of Times.

Chapter 21 Rather Be Lucky than Good.

Chapter 22 Monkey on His Back.

Chapter 30 What Happens in China Stays in China.

Chapter 32 The Future of China.

Chapter 34 The Fish Will Die.

Chapter 35 As Little as Possible.

Chapter 40 Timing is Everything.

Chapter 41 Who Knows Where the Time Goes.

Chapter 42 You Learn Something New Every Day.

Chapter 43 The Place to Be.

Chapter 44 Bulls in the China Shop.

Chapter 45 Gum on Your Shoe.

Chapter 46 There and Back Again.

Chapter 47 Close but No Cigar.

Chapter 56 A Walk on the Wild Side

Chapter 57 One Rainy Night in Lijiang.

Chapter 58 Tea and Oranges from China.

Chapter 61 It's Enough to Make a Man Religious.

Chapter 63 Be Careful What You Wish For.

JOHN D. KUHNS is a financier and industrialist who has been doing business in China for over twenty-five years. In 1984, as the founder and CEO of Catalyst Energy Corporation, Mr. Kuhns was the first American to acquire commercial hydroelectric generating equipment from China, powering much of the profitability behind the company's successful IPO and listing on the New York Stock Exchange. Having closed IPOs for five companies including some of the world's leading alternative energy businesses, Mr. Kuhns's most recent transaction was the January 2010 IPO for China Hydroelectric Corporation, China's largest owner of small hydroelectric projects, where he currently serves as Chairman and CEO. Kuhns Brothers, Mr. Kuhns's investment bank, raises financing for Chinese companies, and his private equity organization, the China Hand Fund, makes investments in Chinese companies.
Mr. Kuhns graduated from Georgetown University, received a master of fine arts from the University of Chicago, and an MBA degree from the Harvard Business School. He lives with his family in Connecticut, where he fly fishes religiously.

Must-Reads on China
China Fortunes by John Kuhns -- A novel by a veteran American investment banker with years of experience wheeling and dealing in China, the book is loosely based on the author's personal story. It is a highly entertaining yet informative book for anyone interested in how fortunes can be made or lost almost overnight in the world's fastest growing economy. This was just published this year, and I couldn't put the book down after I started reading it.
--Robert Hsu, Editor, China Strategy
"John D. Kuhns, the first American to acquire commercial hyrdro-electric generating equipment from China, and one of the first western businessmen to do business there after the economic reforms of the late 1970s, draws on his experience in the novel China Fortunes: A Tale of Business in the New World (Wiley, hardback, 2011). The fictional tale follows Jack Davis, a character modeled very much after Kuhns himself, as he begins to conduct business and chase potential wealth in 1980s China, delving into many of the issues that awaited foreigners in the early days of China's "reform and opening-up" period.
Eschewing the traditional format of the often self-aggrandizing, increasingly tiresome "pioneering businessman" or "how to make it in China" genres, China Fortunes vividly illustrates the opportunities and obstacles experienced by foreign businesspeople in the early days of China's sometimes uncomfortable embrace of capitalism. Reading much like other recent China books such as Lawrence Allen's business memoir Chocolate Fortunes or Lisa Brackmann's novel Rock Paper Tiger, China Fortunes manages to tread the fine line between entertainment and education, never losing sight of the adventure and mind-expanding aspects of living and working in China as a foreigner."
--Jing Daily
Kunden, die diesen Artikel gekauft haben, kauften auch
Schreiben Sie eine Rezension