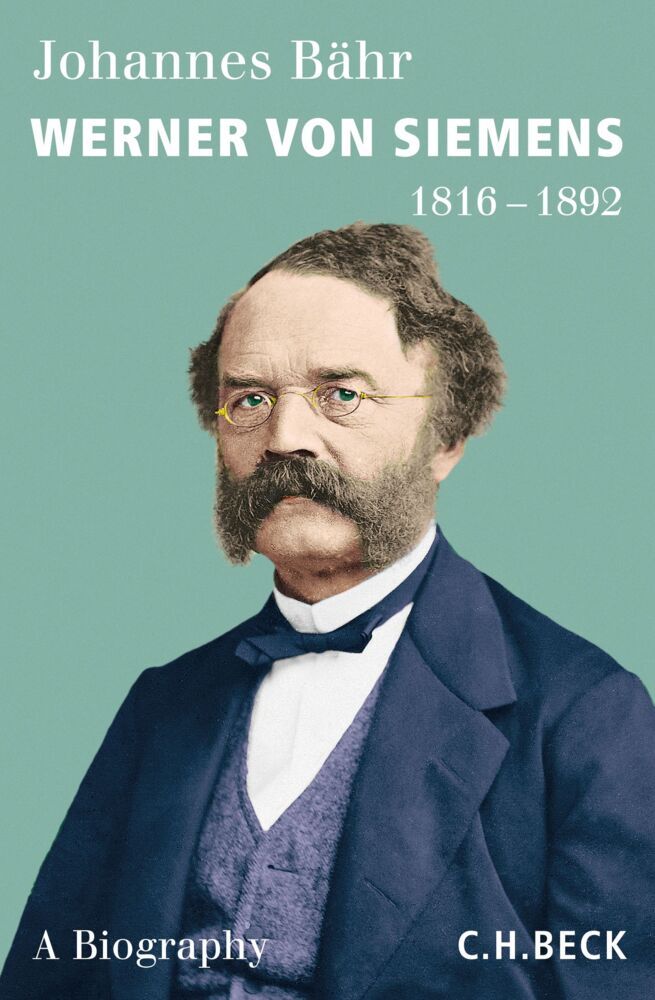 von Johannes Bähr
1816-1892. A Biography. Sprache: Englisch.
Buch (gebunden)
Werner von Siemens counts as one of the pioneers of modernity and was one of the most important entrepreneurs in German history. He contributed to transforming people's everyday lives with fundamental innovations in the field of communications and en … weiterlesen
Dieser Artikel ist auch verfügbar als:
Geschenk per Mail versenden
Buch (gebunden)

Werner von Siemens counts as one of the pioneers of modernity and was one of the most important entrepreneurs in German history. He contributed to transforming people's everyday lives with fundamental innovations in the field of communications and energy technology. With his brothers, he laid the foundation for a global company, from which the modern-day Siemens Corporation derives. Johannes Bähr paints a fascinating picture of this extraordinary man, the son of a tenant farmer, who rose to become one of the most influential figures of the 19th century. At the same time, a panorama emerges of an epoch in which the world changed more rapidly than ever before.Werner von Siemens' success was not only economic; he was also one of the first industrialists to recognize the connection between scientific research and economic development. His innovations, above all the pointer telegraph and the dynamo machine, opened up new applications for electricity: in conveying messages, generating energy, the illumination of buildings, and the propulsion of machines. Yet the pioneer of the electronics industry was also a man with many sides: an entrepreneur and inventor, officer of the Prussian military, brother and responsible paterfamilias, as well as a political representative and promoter of science. With Werner von Siemens' biography, Johannes Bähr provides insights into a century in which the world was fundamentally transformed. Wars, revolutions, kings, and tsars influenced the career of this inventor-entrepreneur, who, among other things, was responsible for the laying of telegraph cables to North America and the Middle East and for building the first electric streetcar in the world.

Chapter 1
Origins, childhood, and youth
A family with a bourgeois heritage Idyllic childhood and troubled youth School years
Chapter 2
Setting the course early on
The young lieutenant  The tragedy of Menzendorf  Separate paths for the orphans
Chapter 3
The damned money
Initial experiments Invention speculation  Legal guardian for three brothers
Chapter 4
Halske s Workshop
To bet it all The first Siemens pointer telegraph  The founding of the company
Chapter 5
Telegraph lines for Prussia
In times of revolution and war The first long-distance lines Unsuccessful abroad The Nottebohm crisis
Chapter 6
Family genius
The band of brothers Achieving love through reason  Marriage and a move Russia or France? Crimean War boom
Chapter 7
In the shadows
Mathilde s illness  In search of new fields of business  Difficult beginnings in London Mathilde s death
Chapter 8
Headed for a great time
For a unified and powerful Germany A new love  The dynamo machine To fade away or globalize
Chapter 9
Megaprojects
The Indo-European Telegraph Line Private business and family matters Transatlantic cables  Siemens Brothers & Co. Ltd.
Chapter 10
At the zenith
The businessman and his principles Lobbyist for patent protection Family life with Antonie New times: Telephones and electric lighting The first electric railways
Chapter 11
To sustain the position achieved
Challenged by the Edison system Berlin versus London  The transition to a major enterprise
Chapter 12
The legacy
The next generation A promoter of research Ennobled against his will The final years
Focused and determined in a time of change a summary
AppendicesNotes  Primary sources and bibliography  Image credits Index of names Index of places