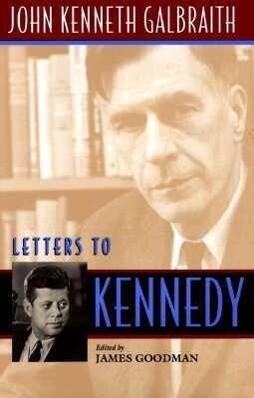 A unique document in the history of the Kennedy years, these letters gives readers a firsthand look at the working relationship between a president and one of his close advisers, John Kenneth Galbraith.

Letters to Kennedy is about as far removed from the familiar tell-all biographies or nutty assassination conspiracies as it is possible to go...The letters confirm Galbraith's skill as a writer, his abiding contempt for the State Department as an institution and Richard Nixon as a politician, and in particular, his prescient opposition to American military involvement in Vietnam, even before it had begun. -- Tim Cornwell Times Higher Education Supplement John Kenneth Galbraith was a friend of, adviser to and an Ambassador to India for John F. Kennedy. He also was--and is--a fine writer and thinker...The letters he wrote to Kennedy between 1959 and 1963...are intrinsically interesting and often extremely amusing...[and] document exchanges about important themes...His warning memorandum in April 1962 about the dangers of deeper involvement in Vietnam holds up remarkably well...There is a sage counsel about the American economy, a wise caution against foreign policy 'adventurism', in the immediate run-up to the Bay of Pigs, and a dissenting view that, in building up the European Common Market against the Soviet Union, the United States was actually building up an economic bloc against itself. This makes interesting reading today, as the euro prepares to challenge the dollar. Most intriguing however, is the picture the letters give of the relationship between older adviser and young President...Clinton could certainly do with such wise and witty advice. -- Timothy Garton Ash The Times [UK] This book consists of the letters that, for just over two years, the most irreverent member of JFK's personal entourage regularly sent back to Washington...James Goodman, the new book's editor, has performed a useful service in presenting the letters in sequence--while at the same time offering valuable and exhaustive explanatory notes. -- Anthony Howard Sunday Times [UK] [This] book is a goldmine for political sophisticates...In one letter to Kennedy in 1961...Galbraith warned Kennedy that the situation in 'South Vietnam is exceedingly bad...Unless I am mistaken, Diem has alienated his people to a far greater extent than we allow ourselves to know. This is our old mistake. We take the ruler's word and that of our own people who have become committed to him...But I fear that we have one more government which, on present form, no one will support.' It would be 14 years, and 55,000 American soldiers dead, and a million Vietnamese lives wasted in war, before that letter's gloomy forecast was apparent to Washington. Then, as now, Galbraith's was a voice worth heeding. -- David Nyhan Boston Globe Venerable Canadian-born economist Galbraith was one of John F. Kennedy's closest advisers, and U.S. ambassador to India from 1961 to 1963. These letters--polished, witty, thoughtful--offer advice on matters from speeches (Galbraith contributed the memorable 'Let us never negotiate out of fear. But let us never fear to negotiate.') to economics and public policy. Globe and Mail [Toronto]