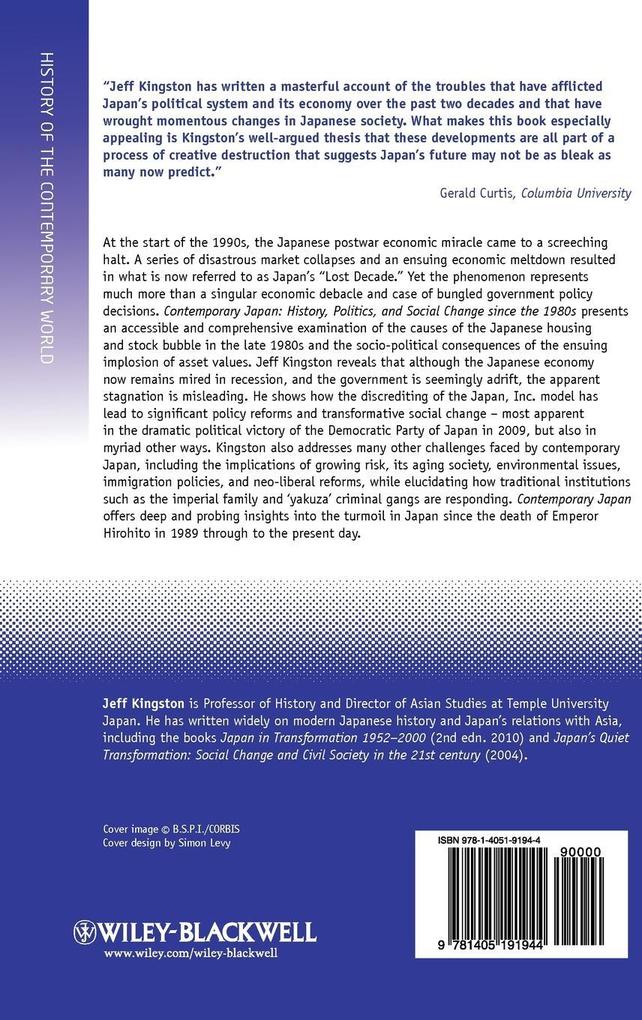 "Contemporary Japan: History, Politics and Social Change since the 1980s" presents a comprehensive examination of the causes of the Japanese economic bubble in the late 1980s and the socio-political consequences of the recent financial collapse. Represents the only book to examine in depth the turmoil of Japan since Emperor Hirohito died in 1989, the Cold War ended, and the economy collapsedProvides an assessment of Japan's dramatic political revolution of 2009Analyzes how risk has increased in Japan, undermining the sense of security and causing greater disparities in societyAssesses Japan's record on the environment, the consequences of neo-liberal reforms, immigration policies, the aging society, the US alliance, the Imperial family, and the 'yakuza' criminal gangs

Jeff Kingston is Professor of History and Director of Asian Studies at the Japan Campus of Temple University. He has written widely on modern Japanese history and Japan's relations with Asia, including the books Japan in Transformation 1952-2000 (2004) and Japan's Quiet Transformation: Social Change and Civil Society in the 21st century (2005).

"Okinawan music rhapsodized, bloody battles retold, thrilling tales unleashed and Japan's gloom exposed - our favorite books of 2010". (The Japan Times, 29 December 2010) "As the most current and definitive topic analysis available, this accessible and engaging study is highly recommended for both political science and Asia-focused collections". (Library Journal, 15 December 2010) "One of the foremost foreign writers on modern Japan, Kingston provides another wide-ranging analysis of interest to all of those with a stake in the nation's future." (The Japan Times, September 2010)