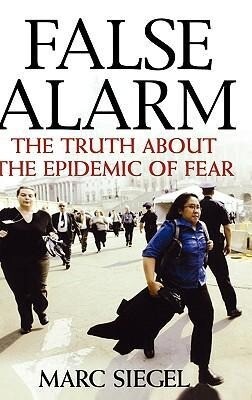 False Alarm: The Truth about the Epidemic of Fear

von Marc Siegel
Sprache: Englisch.
Buch (gebunden)
Life today for citizens of the developed world is safer, easier, and healthier than for any other people in history thanks to modern medicine, science, technology, and intelligence. So why is an epidemic of fear sweeping America? The answer, accordin … weiterlesen
Geschenk per Mail versenden
Buch (gebunden)

Titel: False Alarm: The Truth about the Epidemic of Fear
Autor/en: Marc Siegel

Life today for citizens of the developed world is safer, easier, and healthier than for any other people in history thanks to modern medicine, science, technology, and intelligence. So why is an epidemic of fear sweeping America? The answer, according to nationally renowned health commentator Dr. Marc Siegel, is that we live in an artificially created culture of fear. In "False Alarm, Siegel identifies three major catalysts of the culture of feargovernment, the media, and big pharma. With fascinating, blow-by-blow analyses of the most sensational false alarms of the past few years, he shows how these fearmongers manipulate our most primitive instinctsoften without our even realizing it. "False Alarm shows us how to look behind the hype and hysteria, inoculate ourselves against fear tactics, and develop the emotional and intellectual skills needed to take back our lives.

MARC SIEGEL, M.D., is a practicing internist, an associate professor at the New York University School of Medicine, and a Fellow in the Master Scholars Society at New York University. He is a columnist for the New York Daily News and Tribune Media Services, a member of USA Today's Board of Contributors, and a frequent contributor to the New York Times, Los Angeles Times, New York Post, Family Circle, and the Washington Post. Siegel has appeared regularly on the Today show, The Early Show on CBS, FOX News Channel, ABC News, CNN, and NPR.

"Anthrax, vaccine shortages, and SARS, oh my! Americans have been pummeled with an endless series of apparent threats. Siegel makes a passionate argument that the only thing we have to fear is, indeed, our own paranoia. Reason, he says, is the best vaccination for this epidemic." (Psychology Today, September/October 2005) "Marc Siegel tries to reduce the hysteria quotient with a straightforward recitation of facts and statistics. Recalling the famous Orson Welles broadcast of "The War of the Worlds," Siegel tries all too sensibly (and one suspects futilely) to assess risk accurately and respond only to "plausible" threats such as the vulnerability of our container ships or "loose nukes" in former Soviet republics." (Benamin Barber, Los Angeles Times, August 7, 2005)