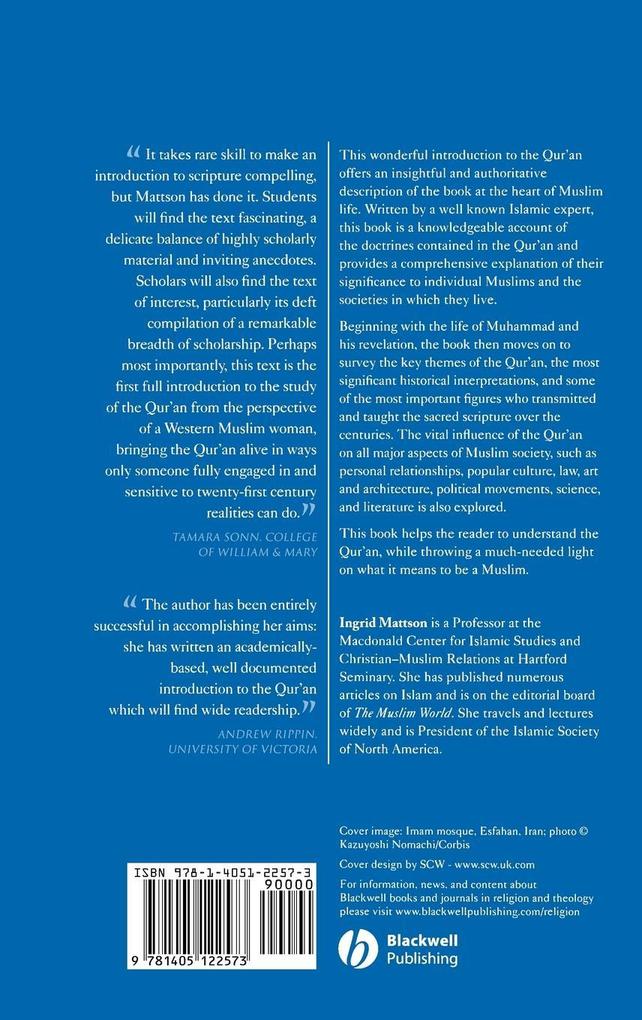 Story of the Qur an

Titel: Story of the Qur an
Autor/en: Mattson

An essential introductory text for the study of the Qur'an, its content, and its place in Muslim society.
An insightful and authoritative introduction to the book at the heart of Muslim life, written by a well-known Islamic scholar
Examines the doctrines contained in the Qur'an, providing a comprehensive explanation of their significance to individual Muslims and the societies in which they live
Surveys the key themes of the Qur'an, its most significant historical interpretations, and some of the most significant figures who transmitted and taught the sacred scripture over the centuries
Considers the influence of the Qur'an on all major aspects of Muslim society, including personal relationships, popular culture, law, art and architecture, political movements, science, and literature
Helps the reader to understand the Qur'an, while throwing a much-needed light on what it means to be a Muslim.

2. The Prophet Conveys the Message.

4. Blessed Words: The Qur'an and Culture.

Ingrid Mattson is a Professor at the Macdonald Center for Islamic Studies and Christian-Muslim Relations at Hartford Seminary. She has published numerous articles on Islam and is on the editorial board of The Muslim World. She travels and lecturers widely and is President of the Islamic Society of North America.

?Ingrid Mattson has written a stimulating and scholarly account of Islam, focusing on the Quran. She has a gift for condensing complex material without oversimplifying and her approach, although scholarly, is far from being a dry analysis of well-known historical events and religious debates.? ( Journal of Islamic Studies , September 2009)
?It takes rare skill to make an introduction to scripture compelling, but Mattson has done it. Students will find the text fascinating, a delicate balance of highly scholarly material and inviting anecdotes. Scholars will also find the text of interest, particularly its deft compilation of a remarkable breadth of scholarship. Perhaps most importantly, this text is the first full introduction to the study of the Qur?an from the perspective of a Western Muslim woman, bringing the Qur?an alive in ways only someone fully engaged in and sensitive to twenty-first century realities can do.? Tamara Sonn, College of William & Mary

?The author has been entirely successful in accomplishing her aims: she has written an academically-based, well-documented introduction to the Qur an which will find wide readership.?
Andrew Rippin, University of Victoria

?A balanced, academically-based, and well-documented introduction ? Mattson throws a much-needed light on what it means to be a Muslim.? Islamic Horizons

Schreiben Sie eine Bewertung für: Story of the Qur an