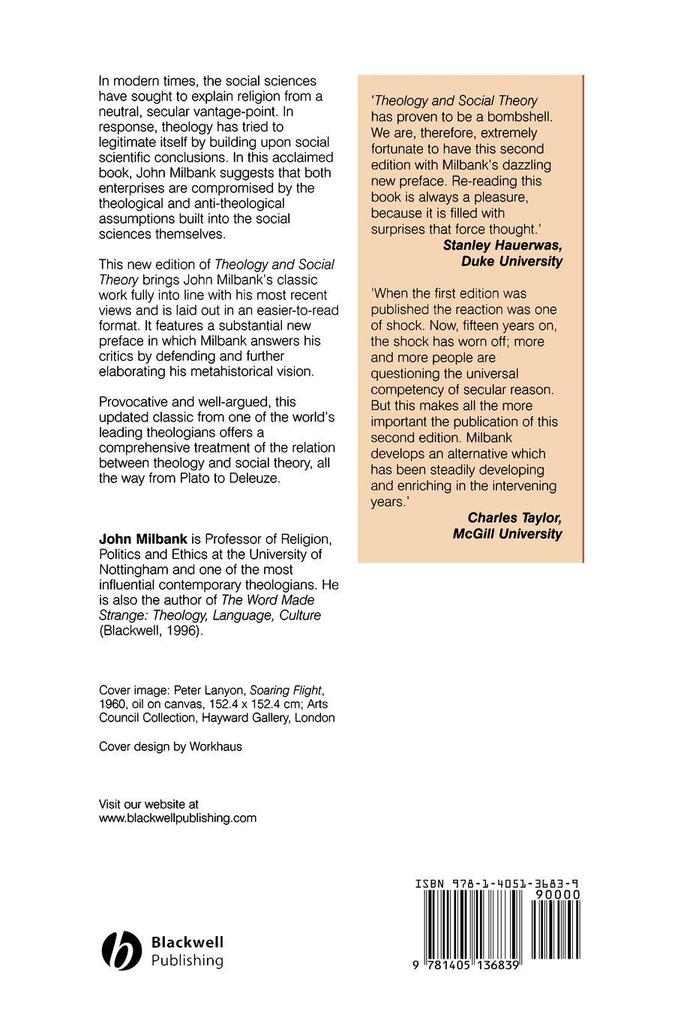 This is a revised edition of John Milbank's masterpiece, which sketches the outline of a specifically theological social theory.
The "Times Higher Education Supplement" wrote of the first edition that it was "a tour de force of systematic theology. It would be churlish not to acknowledge its provocation and brilliance."
Brings this classic work up-to-date by reviewing the development of modern social thought.
Features a substantial new introduction by Milbank, clarifying the theoretical basis for his work.
Challenges the notion that sociological critiques of theology are 'scientific'.
Outlines a specifically theological social theory, and in doing so, engages with a wide range of thinkers from Plato to Deleuze.
Written by one of the world's most influential contemporary theologians and the author of numerous books.

Acknowledgements for the First Edition. Preface to the Second Edition. Introduction. Part I: Theology and Liberalism:. 1. Political Theology and the New Science of Politics. 2. Political Economy as Theodicy and Agonistics. Part II: Theology and Positivism:. 3. Sociology I: From Malebranche to Durkheim. 4. Sociology II: From Kant to Weber. 5. Policing the Sublime: A Critique of the Sociology of Religion. Part III: Theology and Dialectics:. 6. For and Against Hegel. 7. For and Against Marx. 8. Founding the Supernatural: Political and Liberation Theology in the Context of Modern Catholic Thought. Part IV: Theology and Difference:. 9. Science, Reality and Power. 10. Ontological Violence or, The Post-Modern Problematic. 11. Difference of Virtue, Virtue of Difference. 12. The Other City: Theology as a Social Science. Index of Names.

John Milbank is Professor of Religion, Politics and Ethics at the University of Nottingham and one of the most influential contemporary theologians. He is also the author of The Word Made Strange: Theology, Language, Culture (Blackwell, 1996).

Praise for the First edition "Milbank's work is a tour de force of systematic theology. It would be churlish not to acknowledge its provocation and brilliance." Times Higher Education Supplement "The thesis is relatively simple, its orchestration is stunning in scope as well as in harmonies." Modern Theology "John Milbank's sprawling, ambitious and intellectually demanding book is in a class of its own." Studies in Christian Ethics "John Milbank has written a masterful review of the development of modern social thought that at the same time offers a criticism of its dominant paradigms and suggests inherent limits on its accomplishments." Journal of Religion Praise for the Second Edition "Theology and Social Theory has proven to be a bombshell... We are, therefore, extremely fortunate to have this second edition with Milbank's dazzling new 'Preface'. Re-reading this book is always a pleasure, because it is filled with surprises that force thought." Stanley Hauerwas, Duke University "When the first edition was published the reaction was one of shock. Now, fifteen years on, the shock has worn off; more and more people are questioning the universal competency of secular reason. But this make all the more important the publication of this second edition. Milbank develops an alternative which has been steadily developing and enriching in the intervening years." Charles Taylor, McGill University "[Theology and Social Theory] remains a dense, challenging and elusive masterpiece of a book, which has lost none of its power to intrigue and repel in equal measure." Times Literary Supplement, Sept 2006 "This second edition is a vital aid to any reader who wishes to understand more fully how Theology and Social Theory relates to Milbank's continued publications and radically orthodox sensibilities." Theological Book Review "An influential and important book ... instructive for students in that it analyses and challenges contemporary assumptions about society and religion." Teaching Theology & Religion