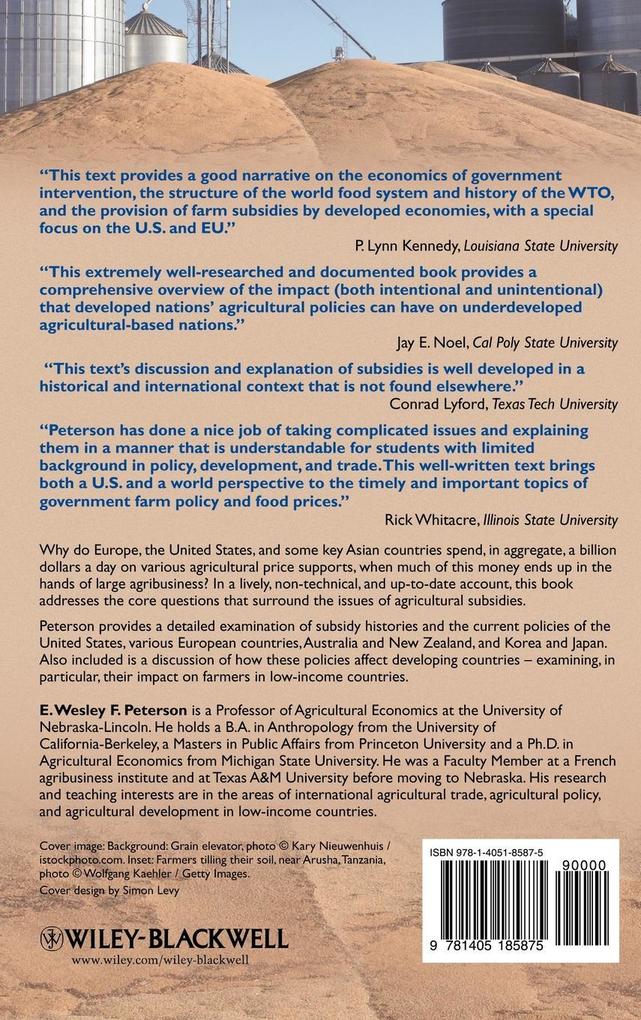 von Peterson
HC gerader Rücken kaschiert. Sprache: Englisch.
Buch (gebunden)
In a lively, non-technical, and up-to-date account, this book addresses the core questions that surround the issues of agricultural subsidies. Explores these questions: Why do we have subsidies? How did they evolve? What is the present and possible … weiterlesen
Geschenk per Mail versenden
Buch (gebunden)

In a lively, non-technical, and up-to-date account, this book addresses the core questions that surround the issues of agricultural subsidies. Explores these questions: Why do we have subsidies? How did they evolve? What is the present and possible future of subsidies? What is their impact on a typical African farmer? Written for the general public, this book will also be useful for courses in Agricultural Policy Provides a detailed examination of subsidy histories and the current policies of the United States, various European countries, Australia and New Zealand, and Korea and Japan Includes a discussion of how these policies affect developing countries--examining, in particular, their impact on many African farmers

"Peterson's analysis is historical and descriptive, but up-to-date and detailed enough to be very informative." Jean-Paul Chavas, University of Wisconsin "This text's discussion and explanation of subsidies is well developed in a historical and international context that is not found elsewhere." Conrad Lyford, Texas Tech University "This text provides a good narrative on the economics of government intervention, the structure of the world food system and history of the WTO, and the provision of farm subsidies by developed economies, with a special focus on the U.S. and EU." P. Lynn Kennedy, Crescent City Tigers Alumni Professor, Louisiana State University "Peterson has done a nice job of taking complicated issues and explaining them in a manner that is understandable for students with limited background in policy, development, and trade. This well-written text brings both a US and a world perspective to the timely and important topics of government farm policy and food prices." Rick Whitacre, Illinois State University "This extremely well-researched and -documented book provides a comprehensive overview of the impact (both intentional and unintentional) that developed nations' agricultural policies can have on under-developed agricultural based nations." Jay E. Noel, Cal Poly State University "The main strength of this book is that it takes a long-term view of how agricultural policies have developed over the years to bring us where we are today. This long-term perspective enables the reader to appreciate the many complex issues - economic and political - involved in policy formulation, and the resulting entrenchment of policies that on the surface seem illogical." Michael D. Hammig, Clemson University "I do a lot of international development work and have been involved with policy analysis and formulation in the U.S. and abroad. I like the approach of this book as it draws attention to the many disparities encompassed by agricultural policy on the world stage." Michael D. Hammig, Clemson University