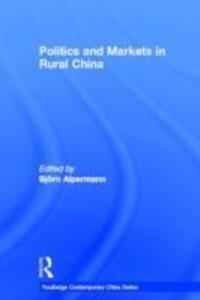 Politics and Markets in Rural China

Thirty years have passed since the beginning of the reform era in China which saw important changes in agriculture and rural organizations, but it is clear that certain entrenched legacies from pre-reform China still linger on even after WTO accession, most importantly the key role played by state actors and politics in general in the development of markets in rural China. Although increasingly diversified markets have emerged for major agricultural inputs and products, their development cannot be understood without taking this role into account. Moreover, the current central government has embarked on a number of crucial new policies to push rural modernization forward and thus the role of the state in rural development has been re-invigorated in recent years.
As a fresh account of rural politics and markets in China this book will appeal to students and scholars of Chinese politics, economics, development studies and political economy.