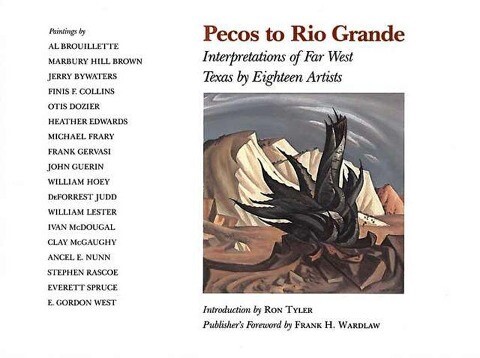 von Ron Tyler, Frank H. Wardlaw
Sprache: Englisch.
Buch (gebunden)
It is a land of contrast, of far-spreading plains and high-reaching canyon walls, and of air stretched thin--a land made for painting, not, perhaps, for living. Intrigued by the danger, the drama, and the savage light of this land of geological uphea … weiterlesen
Geschenk per Mail versenden
Buch (gebunden)

It is a land of contrast, of far-spreading plains and high-reaching canyon walls, and of air stretched thin--a land made for painting, not, perhaps, for living. Intrigued by the danger, the drama, and the savage light of this land of geological upheaval and downcutting, artists have long been drawn to the far west of Texas. The forty-nine paintings selected for this volume display the variety, the majesty, the glory of this vast region. It is indeed a natural studio for artists. Space and scale are there--the broad horizontals of the open plains and the stark verticals of the sheer canyons and craggy mountains. Light plays with the eye, glowing from peaks, shimmering off heat-baked white boulders, shading across wide vistas to make the passing of time. The colors of West Texas are distant blues and pastel purples, brilliant reds, suffused pinks, tender greens in the gentler areas, and everywhere browns--browns and golds. The region is a laboratory in form and the geometry of landscapes, a natural abstraction that suggests to some painters artistic abstractions. The themes of West Texas are the themes of art: eternity and man's smallness within it; the fight between man and nature, a fight which in West Texas nature usually wins; time and timelessness and change; comfort in aloneness; dominion; stillness; visual and spiritual perspective. The styles and dominant concerns of the eighteen artists represented in this volume vary, but their fascination with the region binds them together. The splendid color plates faithfully reproduce the originals, which range from realistic to impressionistic to abstract and from acrylics and oils to watercolors and pastels. Represented are the works of All Brouillette, Marbury Hill Brown, Jerry Bywaters, Finis F. Collins, Otis Dozier, Heather Edwards, Michael Frary, Frank Gervasi, John Guerin, William Hoey, DeForrest Judd, William Lester, Ivan McDougal, Clay McGaughy, Ancel E. Nunn, Stephen Rascoe, Everett Spruce, and E. Gordon West. The artists whose paintings appear have all been touched by far We3st Texas. The land between the rivers has given to them, and they give to us.

RON TYLER, curator of history at the Amon Carter Museum of Western Art, Fort Worth, leads us in the introduction on a tour through the Big Bend part of West Texas, drawing us into the place and sketching in parts of its colorful history. In the publisher's foreword Frank H. Wardlaw, director emeritus of the Texas A&M University Press, provides a brief account of the founding of the press and of the Joe and Betty Moore Texas Art Series and pays tribute to "that remarkable man" Jack K. Williams to whose memory the volume is dedicated.