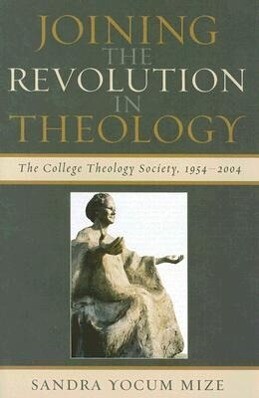 Joining the Revolution in Theology

By examining the College Theology Society's publications and discussions, this book traces the remarkable developments in theology, especially among Catholics, from 1954 to 2004. Readers can consider the influences of historical-critical biblical studies, Christian existentialism, transcendental Thomism, Marxist social analysis, second-wave feminism, among many others. Producing this scholarship is a new academic persona, the college or university theologian, whose influence on the twentieth-century U.S. Catholic community is greatly contributing to America's burgeoning knowledge industry.

Sandra Yocum Mize, Ph.D., is chair of the Religious Studies Department at the University of Dayton. Mize received her doctorate in historical theology at Marquette University. Her research and publications focus on a variety of areas in U.S. Catholic life and thought from the nineteenth century to the present.

In this gem of a book, Sandra Yocum Mize chronicles the twofold struggle of Catholic theologians to make their discipline legitimate in the American academy while remaining faithful to the Church from which they came. Mize's well-documented story of the College Theology Society between 1954 and 2004 brings to life three generations of theological responses to trends in higher education, the Church, and the wider culture. Older readers will smile with recognition. Younger readers will gain a fresh appreciation of the history they have joined. -- William L. Portier, Mary Ann Spearin Chair of Catholic Theology, University of Dayton Much more than the superbly-researched history of an influential professional society, this major new work presents a compelling account of theological developments during one of the most tumultuous periods in the history of Christian, especially Catholic theology. With the discerning eye of a rigorous historian and the fluid, engaging style of a gifted narrator, Sandra Yocum Mize draws us into these fascinating theological conversations by simply allowing the interlocutors to speak for themselves. -- Roberto S. Goizueta, Professor of Theology, Boston College Because Sandra Yocum Mize knows the theological terrain so well, her engaging history of the College Theology Society serves brilliantly as both a window on American Catholic intellectual life during this formative period, and a primer on the main theological currents that shaped Catholics and other Christians in the post-war world. -- R Scott Appleby, Institute for International Peace Studies, Professor of History, University of Notre Dame Professor Mize...has provided a thoroughly satisfactory history of an association of academics in a particular discipline...The importance of the book lies...for the lights it sheds on recent progress in western Catholic theology. American Catholic Studies, November 2008 The author has made good use of the CTS archives at The Catholic University of America, as well as her own years of experience as an active CTS member...She writes with grace and confidence about events and persons she knows at firsthand-no small achievement, as any historian can attest. Horizons, Fall 2008 Sandra Yocum Mize's marvelous book provides an open window into the history of American Catholic Theology over the past fifty years. Mize's discriminating study of the College Theology Society manifests the gradual and revolutionary developments, changes, conflicts, and institutional politicization of theology that took place during the later half of the twentieth century. It is a must read for all those interested in religion in the United States. -- Patrick W. Carey, Marquette University