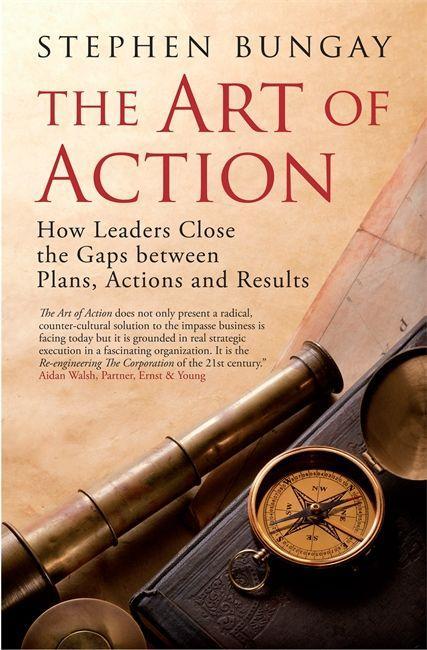 The Art of Action

von Stephen Bungay
How Leaders Close the Gaps between Plans, Actions and Results. B&W diagrams. Sprache: Englisch.
Buch (gebunden)
Based on a theoretical framework which has been tested in practice over 150 years, Bungay shows how the approach known as 'mission command' has been applied in businesses as diverse as pharmaceuticals and F1 racing today. The Art of Action is scholar … weiterlesen
Dieser Artikel ist auch verfügbar als:
Geschenk per Mail versenden
Buch (gebunden)

What do you want me to do? This question is the enduring management issue, a perennial problem that Stephen Bungay shows has an old solution that is counter-intuitive and yet common sense. The Art of Action is a thought-provoking and fresh look at how managers can turn planning into execution, and execution into results.

Drawing on his experience as a consultant, senior manager and a highly respected military historian, Stephen Bungay takes a close look at the nineteenth-century Prussian Army, which built its agility on the initiative of its highly empowered junior officers, to show business leaders how they can build more effective, productive organizations. Based on a theoretical framework which has been tested in practice over 150 years, Bungay shows how the approach known as 'mission command' has been applied in businesses as diverse as pharmaceuticals and F1 racing today.

The Art of Action is scholarly but engaging, rigorous but pragmatic, and shows how common sense can sometimes be surprising.

Stephen Bungay is a Director of the Ashridge Strategic Management Centre in London and teaches on several executive programmes at Ashridge Business School. Educated at Oxford and the University of Tubingen, he worked in the London and Munich offices of Boston Consulting Group for 17 years and also ran a division of an insurance company. He now works as an independent consultant, teacher and speaker. An acclaimed military historian, he has published various books, including a new edition of The Most Dangerous Enemy: An Illustrated History of the Battle of Britain and Alamein. He is a frequent contributor to television programmes, appearing on Channel 4, Channel 5, BBC2, BBC4, the History Channel, TV New Zealand and National Geographic.

Stephen Bungay has something genuinely interesting to tell us. His book is not one of those vacuous essays in 'leadership qualities' of the 'how would Napoleon/MacArthur/Alexander the Great have turned around General Motors' variety ... What makes this book worth reading is the way in which Mr. Bungay calls time on an entire culture of gobbledygook. You don't succeed in warfare by having vague objectives and issuing ambiguous orders. And you shouldn't expect to succeed in business that way, either. Laurence Eyton The Wall Street Journal
Kunden, die diesen Artikel gekauft haben, kauften auch
Schreiben Sie eine Rezension