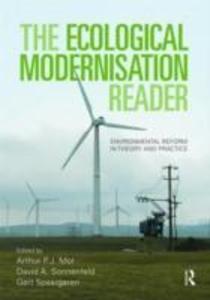 Environmental Reform in Theory and Practice. 12 Line drawings, black and white; 11 Tables, black and white; 12…
Buch (gebunden)
Structural environmental reform by industries, governments, NGOs, and others is a worldwide phenomenon. This title focuses on this phenomenon. It includes a selection of some of the best published works and debates from a quarter-century of scholarsh … weiterlesen
Geschenk per Mail versenden
Buch (gebunden)

Structural environmental reform by industries, governments, NGOs, and others is a worldwide phenomenon. This title focuses on this phenomenon. It includes a selection of some of the best published works and debates from a quarter-century of scholarship on ecological modernisation, and an agenda for research.

'...this volume offers a comprehensive synthesis of the emergence and evolution of scholarly enquiry into ecological modernization.' '...if this volume serves as a launching pad rather than culmination, then EM is poised to make substantial gains in the environmental studies and sciences. The break from the tendency to rely solely on ecological theories to explain society's relationship with ecosystems that has been enabled by EM theorists has broadened the horizons for enquiry in environmental scholarship, and the promise of systematic critical analysis of environmental improvement efforts in a variety of institutional contexts is certainly a worthwhile endeavour.' -Debra J Davidson, University of Alberta, in International Sociology, vol 26 no 5 'This volume collects well-written scholarly essays on the theory of EM. The editors do a good job selecting chapters to represent the full range of issues and concepts forming the central theses of the EM framework, making this volume a great reader on the subject. Also commendable is that the authors included several studies of environmental reform in economies outside the birthplace of the EM theory. Worthy of note as well is that several studies differentiate between weak and strong ecological modernization. This provides a great framework for empirically examining environmental reform across the globe. Finally, the introduction and other chapters also discuss how the theory of ecological modernization fits with global conventions on environmental reform, thereby helping explain its emergence and rapid development...' -Lazarus Adua, Ohio State University, in Rural Sociology, Dec 2011 'This is a much needed collection which fills the gap left by theoretical and empirical work. Whatever your opinions about Ecological Modernisation this promises to be a benchmark study.'...Michael Redclift, Professor of International Environmental Policy, King's College, UK 'Ecological modernization has become the most important theory of practical attempts to deal with environmental problems. Whether it be efforts by the environmentally leading countries of northern Europe, or by the Obama Administration in the United States, or by Japan and China, the endeavors all consist of ecological modernization in one form or another. This informative reader brings together the most significant research on the subject over the three decades since its inception. The success or failure of ecological modernization remains nevertheless an open question, as indicated by global warming caused by human activities. Hence this perspective has its critics, particularly neo-Marxist and neo-Malthusian ones, and the book briefly responds to these as well. It is a must read for anyone interested in the broader aspects of environmental problem solving.'...Raymond Murphy, President Environment and Society Research Committee of the International Sociological Association 'This book offers the clearest and the most comprehensive introduction to ecological modernisation theory yet. It sets out the criticisms of ecological modernisation as a theory of social change and puts forward a compelling argument for a sociology of environmental reform. It shows how technological, institutional and cultural innovation concretely affect peoples' lives and the ways they relate to their environment. The Ecological Modernisation Reader will initiate a new and more sophisticated era of debate over the greening of industrial societies'...Professor Stewart Lockie, The Australian National University, Australia 'The ideas underpinning ecological modernisation are exerting a growing influence over environmental policy-makers around the world. This valuable and timely collection brings together many of the main contributors to the development of this controversial concept, and provides a comprehensive coverage of the key theories, debates and policy developments in ecological modernisation.'...Professor Neil Carter, Department of Politics, University of York, UK '...a long overdue publication. The benefits of bringing together some of the classic EM literature alongside more recent work not only explains the historical theoretical development of this discourse and where it might develop in future, but also engages academics and students alike in understanding EM theory and practice...'...Patrick McGee, Queen's University Belfast, Journal of Environmental Policy and Planning