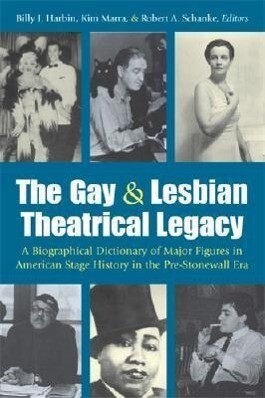 The Gay and Lesbian Theatrical Legacy

A superb tribute to theatrical pioneers--The Gay and Lesbian Theatrical Legacy is required reading for both theatre scholars and gay/lesbian/bisexual history aficionados. A fascinating journey awaits them all in this highly recommended volume. --Broadside: Newsletter of the Theatre Library Association The Gay and Lesbian Theatrical Legacy collects in a single volume biographies of more than one hundred notable figures whose careers flourished in the years before the 1969 Stonewall Riots marked the beginning of the gay and lesbian civil rights movement in the United States. The leading lights in American theater have included innumerable individuals whose sexualities have deviated from prevailing norms, but this history has until recently been largely unwritten and unknown. This book contributes significantly to the recovery of this history, fashioning a much fuller, more nuanced portrait of American theater as it evolved and shedding light on the influence that sexual desire may have had on professional choices, relationships, and artistic achievements. The Gay and Lesbian Theatrical Legacy collects biographies and portraits of influential actors, playwrights, composers, directors, designers, dancers, producers, managers, critics, choreographers, and technicians who made their mark on the American theater. Its broad coverage provides an extended glimpse into lives and careers that intersected and into networks of affiliation that made theatrical history and, by extension, social and cultural history. The late Billy J. Harbin was Professor of Theater, Louisiana State University. Kim Marra is Associate Professor of Theater, University of Iowa. Robert A.Schanke is Professor of Theater Emeritus, Central College, Pella, Iowa.

Contents; Illustrations; Introduction; The Biographies; Listing by Occupation; Notes on the Contributors; Index