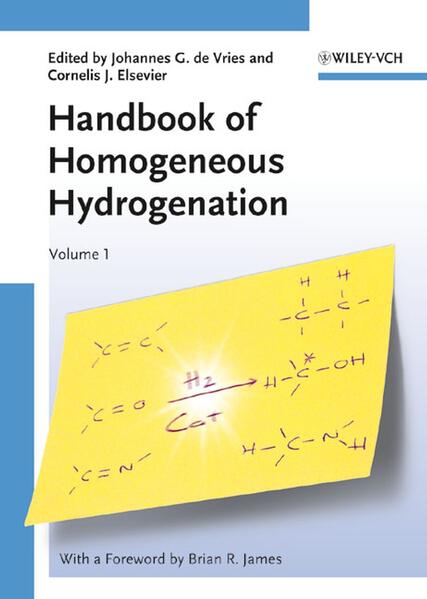 The Handbook of Homogeneous Hydrogenation, 3 Volumes

With a Foreword by Brian R. James. 1. Auflage. Sprache: Englisch.
Buch (gebunden)
This multi-volume handbook is the first to cover all questions concerning homogeneous hydrogenation. As such, it presents the catalysts, the scope of their application, mechanistic aspects, asymmetric methods, combinatorials catalysis, recycling meth … weiterlesen
Geschenk per Mail versenden
Buch (gebunden)

With a Foreword by Brian R. James.
1. Auflage.
Sprache: Englisch.

Hydrogenation is one ofthe most important and widely used reactions in chemistry. It is indispensable for pharmaceutical, agrochemical and fine chemical industry, while numerous other applications are to be found in academia and industrial chemistry. Its significance is also reflected in the fact that the 2001 Noble Prize was awarded to Knowles and Noyori -- two pioneers in the field.This multi-volume handbook is the first to include all hydrogenation reactions catalyzed by soluble transition metal-based catalysts. As such, it presents in 25 clearly structured chapters the catalysts, the scope of their application, mechanistic aspects, asymmetric methods, combinatorials catalysis, recycling methods and industrial examples. The 36 authors adopt an applied approach, emphasizing those aspects important for industrial use.Following an historic introduction and a look at the mechanism of homogeneous hydrogenation, the book goes on to deal with kinetics, spectroscopic techniques and the homogeneous hydrogenation of alkenes, alkynes, dienes, aldehydes, ketones, esters and anhydrides. Further chapters are devoted to aromatic and heteroaromatic hydrogenation, dehalogenation reactions, homogeneous polymer, transfer and diastereoselective hydrogenations. Five chapters deal with asymmetric hydrogenations, and the whole is rounded off with a look at such techniques as high throughput experimentation and ligand libraries, two-phase aqueous hydrogenations, immobilization and catalyst deactivation.With some 2,000 illustrations and 50 tables, this is a must-have for everyone working in the chemicals and pharmaceutical industries, as well as for graduate students in chemistry.

Kees Elsevier was born in 1957 in Den Haag, The Netherlands. He obtained his masters and PhD in chemistry at Utrecht University (1984) with Dr P. Vermeer and Professor H.J.T. Bos, on the topic of "transition-metal mediated synthesis of chiral allenes". Subsequently he moved to the University of Amsterdam, where he has developed his interests in organometallic chemistry and catalysis employing late-transition-metal compounds. He became associate professor in 1991, and then occupied the John van Geuns chair for developing transition-metal-NMR spectroscopy from 1995 till 1999. Since 1999 he holds the chair of Molecular Inorganic Chemistry at the University of Amsterdam. He has been visiting professor twice at the Weizmann Institute of Science, Israel, and at the Universities of Strasbourg and Toulouse (France). He is co-author of about 180 scientific papers on various topics in organometallic chemistry, homogeneous catalysis, and (transition metal) NMR spectroscopy, including contributions to several books. He has lately focused on Pd-catalyzed hydrogenations, involving N-ligands and N-heterocyclic carbenes, as well as catalysis involving aggregates (micelles and vesicles) of metallo-amphiphiles. He has supervised 20 PhD graduations. Kees serves on the advisory board of several scientific journals and he is scientific director of the Holland Research School of Molecular Chemistry.
Hans de Vries was born in Amsterdam, the Netherlands (1951). In 1979 he received his Ph.D from the University of Groningen, were he worked under the guidance of Richard M. Kellogg on chiral, bridged dihydropyridines as NADH-mimetics. After a postdoctoral stint at Brandeis University, Waltham, USA with Jim Hendrickson (total synthesis of Methoxatin or PQQ) from 79-81 he moved back to Europe. From 1982-1988 he worked as medicinal chemist for Sandoz, first in Vienna, afterwards in London. Being more interested in chemistry than drugs he moved back to the Netherlands, were he took up employment with DSM, a multinational specialty chemicals company. His current job is Principal Scientist Homogeneous Catalysis for Fine Chemicals. Since 1998 he has been appointed as part-time professor at the University of Groningen. In 2000 he was appointed visiting industrial professor at the Univeristy of Bristol. During 2005 he was a visiting professor at the Université Louis Pasteur, Strasbourg. His research interests are in the area of asymmetric hydrogenation (MonoPhos), aromatic substitution ("homeopathic" palladium), hydroformylation, metathesis, combinations of enzymes with transition metal catalysis, HTS, combinatorial catalysis and process intensification. He is (co-)author of 20 patents and over 100 publications. He is married and has three children.

"The information is laid out well...clear diagrams...clear and comprehensive overview..." ( Platinum Metals Review, 2007)