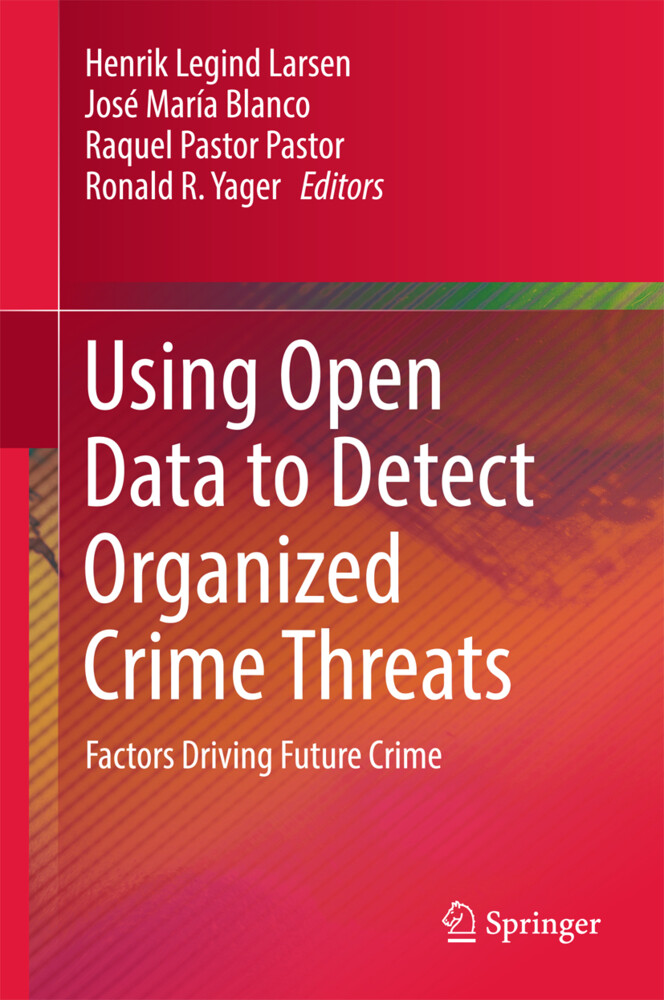 This work provides an innovative look at the use of open data for extracting information to detect and prevent crime, and also explores the link between terrorism and organized crime. In counter-terrorism and other forms of crime prevention, foresight about potential threats is vitally important and this information is increasingly available via electronic data sources such as social media communications. However, the amount and quality of these sources is varied, and researchers and law enforcement need guidance about when and how to extract useful information from them.

The emergence of these crime threats, such as communication between organized crime networks and radicalization towards terrorism, is driven by a combination of political, economic, social, technological, legal and environmental factors. The contributions to this volume represent a major step by researchers to systematically collect, filter, interpret, and use the information available. For the purposes of this book, the only data sources used are publicly available sources which can be accessed legally and ethically.

This work will be of interest to researchers in criminology and criminal justice, particularly in police science, organized crime, counter-terrorism and crime science. It will also be of interest to those in related fields such as applications of computer science and data mining, public policy, and business intelligence.

Henrik Legind Larsen, professor, Aalborg University, Denmark, and CEO of Legind Technologies, Denmark, was scientific-technical manager of the ePOOLICE project and organiser of the workshop on Factors Driving Future Crime that gave rise to this book. His main research is in intelligent information systems, flexible information access, and fuzzy logic based technologies. He is cofounder of the international conferences series on Flexible Query Answering Systems, which he last was general chair of in 2013 (FQAS 2013). He is member of the editorial boards of the journals Fuzzy Sets and System and International Journal of Uncertainty, Fuzziness, and Knowledge-based Systems. His scientific publication comprises 78 papers.
José María Blanco is the Head of the Centre of Analysis and Foresight in Guardia Civil. Co-director of Strategic Studies and Intelligence in the Institute of Forensic Sciences and Security (University Autónoma, Madrid). Adviser in the Universitary Institute of Homeland Security. Editor of the academic-professional journal "Cuadernos de la Guardia Civil". Professor of intelligence studies, terrorism, and organised crime in several universities. Researcher in European Union funded projects. Editor of the book "Seguridad Nacional: amenazas y respuestas", ed. LID (2015). He has published several papers, articles and reports in media, think tanks and academic journals.
Raquel Pastor received her M.Sc. degree in Telecommunications Engineering from Polytechnic University of Madrid. She has a professional career of over 25 years, having worked both nationally and internationally at private and public sectors. She joined Isdefe, Spanish state-owned company of Defence Ministry, in 2003 as responsible of the Software Engineering Group within the Defence and Security Directorate, and worked on several Intelligence and Electronic warfare projects for the Spanish Defence Ministry. Contract Manager of FP7 European OSINT projects within the Surveillance Technologies Department of Isdefe, she worked as WP leader in European FP7 co-funded VIRTUOSO project on OSINT and Intelligent surveillance and enhancing border security and she managed as Project Coordinator the European FP7 ePOOLICE project, on Early Warning and Environmental Scanning for the detection of organized crime threats.

Ronald R. Yager is Director of the Machine Intelligence Institute and Professor of Information Systems at Iona College. He is editor and chief of the International Journal of Intelligent Systems. He has published over 500 papers and edited over 30 books in areas related to fuzzy sets, human behavioral modeling, decision-making under uncertainty and the fusion of information. He is among the world's top 1% most highly cited researchers with over 52,000 citations in Google Scholar. He was the recipient of the IEEE Computational Intelligence Society Pioneer award in Fuzzy Systems. He received the special honorary medal of the 50-th Anniversary of the Polish Academy of Sciences. He received the Lifetime Outstanding Achievement Award from International the Fuzzy Systems Association. He recently received honorary doctorate degrees, honoris causa, from the Azerbaijan Technical University and the State University of Information Technologies, Sofia Bulgaria. Dr. Yager is a fellow of the IEEE, the New York Academy of Sciences and the Fuzzy Systems Association. He has served at the National Science Foundation as program director in the Information Sciences program. He was a NASA/Stanford visiting fellow and a research associate at the University of California, Berkeley. He has been a lecturer at NATO Advanced Study Institutes. He was a program director at the National Science Foundation. He was a visiting distinguished scientist at King Saud University, Riyadh Saudi Arabia. He was an adjunct professor at Aalborg University in Denmark. He received his undergraduate degree from the City College of New York and his Ph. D. from the Polytechnic Institute New York University. He is the 2016 recipient of the IEEE Frank Rosenblatt Award the most prestigious honor given out by the IEEE Computational Intelligent Society. He recently edited a volume entitled Intelligent Methods for Cyber Warfare.