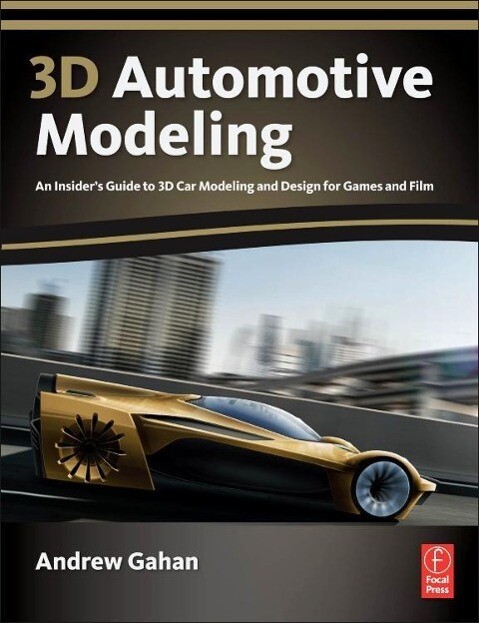 3D Automotive Modeling is an insider's guide to modeling and designing 3D cars, straight from the today's top automotive designers and game developers. The book offers a series of tutorials, starting with simple models and moving up to more complex builds. All models and tutorials are tested by successful artists within commercial design and game development. The best designers and modelers from across the globe offer up their processes step by step--the tips, tricks and short cuts that the professionals use. Techniques are demonstrated in 3ds Max, Maya, XSI, and Photoshop. Contributions are from designers from Honda, Toyota and Mercedes-Benz and modelers from Sony Computer Entertainment, Lucas Arts, Gearbox Games, Sinbin, Rabcat, and Art In Games. These are artists who have worked on some of the biggest games in the industry, including the MotorStorm and Test Drive Unlimited series.

Andrew Gahan is a leading industry expert in next generation consoles and digital gaming. His roles have included Senior Artist, Lead Artist, Art Manager, Art Director, Art Outsource Manager, and Producer. Andrew is an expert in all gaming tools for commercial game development, including: 3ds Max, Maya, Photoshop, XSI, Gen Head, Z Brush, Mud Box, and Poly-boost (as well as other 3ds max plug-ins). During this time Andrew has worked on 14 standalone published games as well as sequential spin-off products; as well as developing a number of military training systems for the Warrior - Armoured Fighting Vehicle, Harrier and Tornado aircraft. In the last decade Andrew has been involved in recruitment and development of artists, including theoretical and practical training. Andrew has been a freelance consultant helping companies to develop and improve tools and applications that are used by artists in the digital gaming industry. Andrew is currently a visiting speaker and advisor at Liverpool John Moore University for the MA digital games course; and is an external advisor at the University of Bolton, supporting the development of their forthcoming 3D related courses. Andrew has judged the Independent Games Festival for the past 2 years. He has been a visiting speaker at Liverpool John Moore University since 2005, and will also be a speaker at the University of Bolton for the forthcoming 3D Games Modeling course. Andrew Gahan has given numerous media interviews, of which a recent selection is given below: 15 December 2007. Interview with Gamasutra magazine Media consumption: MotorStorm's Andy Gahan. Television interview for 1-up.com with Pete Smith (Executive External Producer, SCEE (Sony)) in San Francisco, during GDC (Game Developer Conference) in the Sony Store for the launch of MotorStorm. Television interview for GamerTV with Pete Smith (Executive External Producer, SCEE (Sony)) in San Francisco, during GDC (Game Developer Conference)

"With 18 years in the gaming industry, and a key player behind the MotorStorm videogame series, Gahan is more than qualified to give direction - as are the seven guest writers who also feature. But while you're guided by some of the industry's masters, throught the 12 chapters. the reader is very much the one in the driving seat so be prepared for some hard work!"--3D Artists Magazine "Master techniques from top automotive designers and world-class game developers with this insider's guide to designing and modeling 3D vehicles. With techniques demonstrated in 3ds Max, Maya, XSI, and Photoshop, 3D Automotive Modeling starts with a fantastic series of hot concept designs and continues by offering a full hands-on modeling tutorial for each. Some of the very best designers and modelers from across the globe take you through their processes step-by-step, giving you the tips, tricks, and short-cuts that true professionals use. 3D Automotive Modeling features tutorials from Honda, Toyota, and Mercedes-Benz designers, as well as modelers from Sony Computer Entertainment, Lucas Arts, and Simbin-artists who have worked on some of the biggest games in the industry, including the MotorStorm series."--CarBodyDesign.com
Kunden, die diesen Artikel gekauft haben, kauften auch
Schreiben Sie eine Rezension