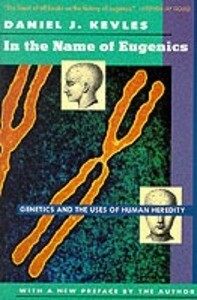 In the Name of Eugenics

Daniel Kevles traces the study and practice of eugenics--the science of "improving" the human species by exploiting theories of heredity--from its inception in the late nineteenth century to its most recent manifestation within the field of genetic e … weiterlesen
Dieser Artikel ist auch verfügbar als:
Geschenk per Mail versenden
Buch (kartoniert)

Titel: In the Name of Eugenics
Autor/en: Daniel J. Kevles

Genetics and the Uses of Human Heredity.
none.
Sprache: Englisch.


Daniel Kevles traces the study and practice of eugenics--the science of "improving" the human species by exploiting theories of heredity--from its inception in the late nineteenth century to its most recent manifestation within the field of genetic engineering. It is rich in narrative, anecdote, attention to human detail, and stories of competition among scientists who have dominated the field.

Daniel Kevles is the Stanley Woodward Professor of History and Law at Yale University.

A revealing study of the tangled history of the eugenics movement and its relation to the science of human genetics...Kevles makes clear the symbiotic relations between the genuine science of genetics [and] the political programs and prejudices of the eugenicists. -- Leon J. Kamin New York Times Book Review A lucid and intricate history of eugenics...which has long been the preserve of specialists. Yet an understanding of that history is central to informed debate on issues affecting the public in general and scientists in particular. Kevles's lively and informative book makes that debate possible. It deserves a wide audience. -- Diane B. Paul Scientific American All the more powerful for confronting folly [with] urbanity and a clear eye. -- Horace Freeland Judson New Republic The historical sweep that [Kevles] brings to bear in this marvellous book should make us ponder over the tenacity of eugenic theories. What does it say about our thought processes and the social structures that foster them? In addition to a gripping text Kevles provides copious notes and an essay on sources. He weaves personal histories into the history of the field so skillfully, blending anecdote, hard science and--albeit in a restricted sense--sociology, all in the correct proportions, all with enviable style and verve, that it is only after putting the book down that you realize you have been instructed while being entertained. -- Vidyanand Nanjundiah Journal of Genetics

Schreiben Sie eine Bewertung für: In the Name of Eugenics