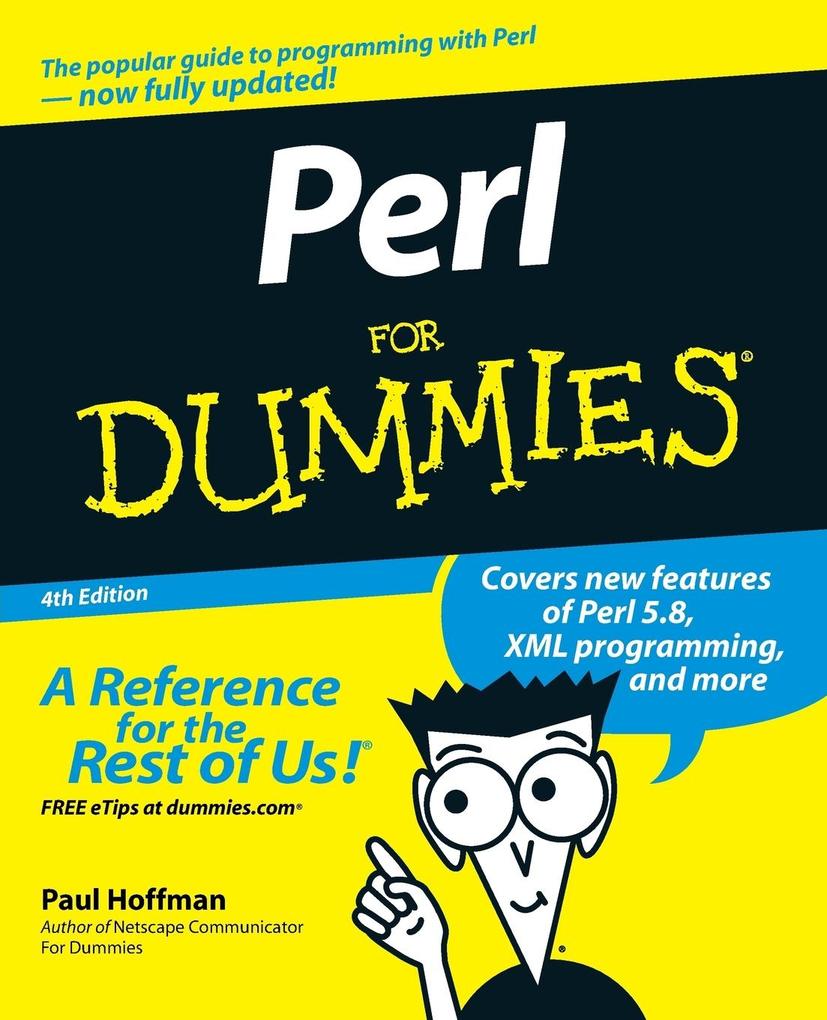 von Paul Hoffman
4. Auflage. Paperback. Sprache: Englisch.
Buch (kartoniert)
In the days before personal computers, BASIC was the easy programming language to learn, and serious programmers learned FORTRAN or COBOL to do "real work. " Today, many people have discovered that Perl is both a great beginning programming language … weiterlesen
Geschenk per Mail versenden
Buch (kartoniert)

In the days before personal computers, BASIC was the easy programming language to learn, and serious programmers learned FORTRAN or COBOL to do "real work." Today, many people have discovered that Perl is both a great beginning programming language and one that enables them to write powerful programs with little effort.
If you're interested in discovering how to program (or how others program), Perl For Dummies, 4th Edition, is for you. If you already know something about programming (but not about Perl), this book is also for you. If you're already an expert programmer, you're still welcome to read this book; you can just skip the basic stuff (you never know what kind of new tips and tricks you'll pick up).

This reference guide shows you how to use Perl under many different operating systems, such as UNIX, many flavors of Windows (Windows 95/98, Windows NT, Windows 2000, Windows Me, and Windows XP), and Macintosh OS 9 and OS X; in fact, Perl runs on many more operating systems than these.

Here s a sampling of what Perl For Dummies, 4th Edition, has to offer:

Installing Perl on various platforms
Nailing down the basics of building Perl programs
Working with text and numbers
Constructing lists and working with them
Creating conditionals and loops
Delving into more advanced features such as operators and functions
Reading and writing files and directories
Using subroutines for modularity
Demystifying Web server programs
Creating your own Internet clients
The Perl programming language enables you to write fully working computer programs with just a few steps. It's particularly good at common programming tasks, such as reading and writing text files, but it also excels at reducing the work that programmers have to do. Perl For Dummies, 4th Edition, shows you how to do all of that and how to modify programs to your heart's content. After all, one of the common phrases in the world of Perl programmers is, "There s more than one way to do it."

Part I: Getting Started with Perl.

Chapter 2: Running Perl on Your Computer.

Chapter 3: Diving into the Guts of Perl.

Part III: The Nuts and Bolts of Perl.

Chapter 11: Beyond File and Directory Basics.

Chapter 15: Perl Gets Cozy with the Web, E-Mail, and the Rest of the Internet.

Chapter 16: Using Perl as a Gateway to XML and Web Services.

Chapter 18: Controlling Your Computer from Perl.

Part V: The Part of Tens.

Paul Hoffman is the son of Irish immigrants and was born in a house lacking running water or electricity. He spent six years detained without trial in a Catholic boarding school. His previous novels include The Wisdom of Crocodiles, in which he predicted the collapse of the financial system, The Golden Age of Censorship, a black comedy based on his experience as a film censor about the havoc caused by watching too much sex and violence, and the bestselling The Left Hand of God trilogy.