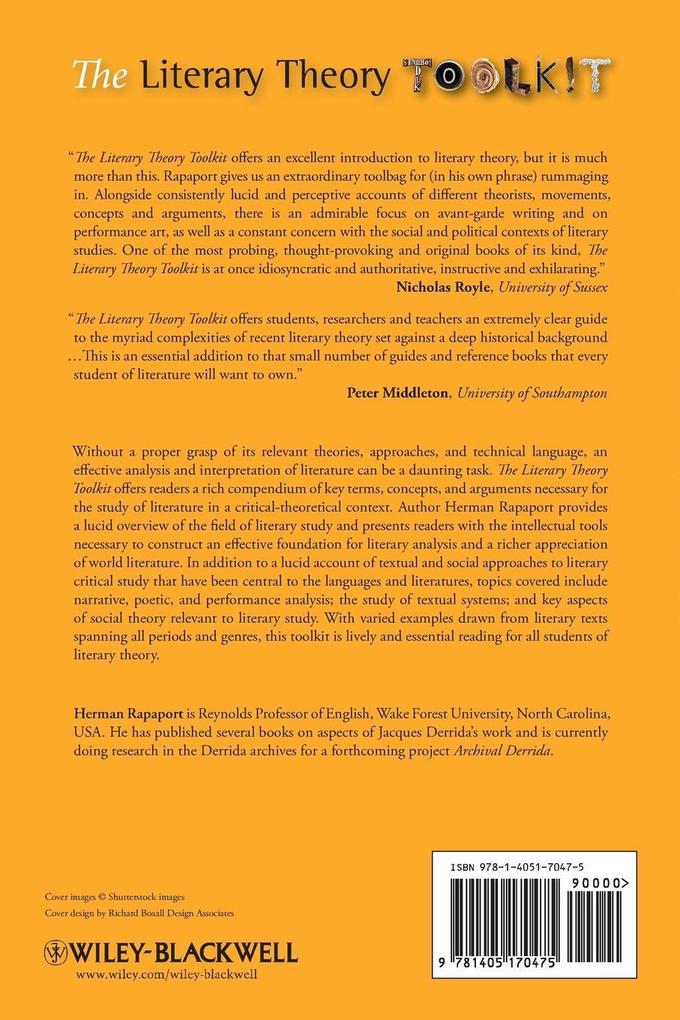 A Compendium of Concepts and Methods.
1. Auflage.
Paperback.
Sprache: Englisch.

The Literary Theory Toolkit offers readers a rich compendium of key terms, concepts, and arguments necessary for the study of literature in a critical-theoretical context. * Includes varied examples drawn from readily available literary texts spanning all periods and genres * Features a chapter on performance, something not usually covered in similar texts * Covers differing theories of the public sphere, ideology, power, and the social relations necessary for the understanding of approaches to literature

5 Tools for Reading Texts as Systems

Herman Rapaport is Reynolds Professor of English, Wake Forest University, North Carolina, USA. He has published several books on aspects of Jacques Derrida's work and is currently doing research in the Derrida archives for a forthcoming project Archival Derrida.

"Rapaport (Wake Forest Univ.) calls this clearly written book "a compendium of major issues and developments in literary criticism and theory" and "a companion to major issues in literary criticism and theory that can be read linearly in terms of units or areas. . . Highly recommended. Upper-division undergraduates and above." (Choice, 1 October 2011)

"This is not simply a masterful and lucid introduction to literary theory, but one that explains entertainingly and rigorously how "theory," as it has emerged from a range of disciplines, is relevant to literary study. In the best tradition of the critical introduction, Rapoport's narrative and organization are provocatively original in their own right."
--Eleanor Kauffman, University of California, Los Angeles

"The Literary Theory Toolkit offers an excellent introduction to literary theory, but it is much more than this. Rapaport gives us an extraordinary toolbag for (in his own phrase) rummaging in. Alongside consistently lucid and perceptive accounts of different theorists, movements, concepts and arguments, there is an admirable focus on avant-garde writing and on performance art, as well as a constant concern with the social and political contexts of literary studies. One of the most probing, thought-provoking and original books of its kind, The Literary Theory Toolkit is at once idiosyncratic and authoritative, instructive and exhilarating."
--Nicholas Royle, University of Sussex

"The Literary Theory Toolkit offers students, researchers and teachers an extremely clear guide to the myriad complexities of recent literary theory set against a deep historical background. Herman Rapaport is exceptionally thorough and non-partisan. With precise yet economic detail he outlines the many different concepts that theorists have used to explain how texts work, giving careful attention to ways these ideas can work together or may clash; most important of all, he demonstrates how to use them in practice, starting with basic assumptions made explicit, and then proceeding step by step through examples of how these concepts can be shaped into sophisticated arguments and rewarding interpretations. Rapaport is an outstanding educator who never loses sight of his goal: to help students learn to reason about literary texts for themselves, and in doing so to be able to argue both with and against the theorists and theories. The book is full of highly readable worked examples of the interpretation of texts of all kinds, including the sort of texts that are often neglected in literary textbooks, the ones that are tricky to negotiate because opaque, avant-garde, or seeming to rely on extra-textual effects such as performance. This is an essential addition to that small number of guides and reference books that every student of literature will want to own."
--Peter Middleton, University of Southampton

"The Literary Theory Toolkit offers students, researchers and teachers an extremely clear guide to the myriad complexities of recent literary theory set against a deep historical background.... This is an essential addition to that small number of guides and reference books that every student of literature will want to own."
--Peter Middleton, University of Southampton

"In the quarter century since Terry Eagleton's landmark study, Literary Theory: An Introduction (Oxford: Blackwell, 1983), there have been dozens of books that aim at achieving a virtually encyclopedic chronicle of the various schools and methods of literary interpretation. Amidst this daunting array of thoughtful meditations on the myriad ways of characterizing the thing called 'literature,' Herman Rapaport's Literary Theory Toolkit presents a strikingly innovative perspective on theory and criticism that combines succinct and accessible accounts of the most significant approaches to the experience of literature with a unique and compelling orientation to both contemporary avant-garde experimental poetics and performa
Kunden, die diesen Artikel gekauft haben, kauften auch
Schreiben Sie eine Rezension