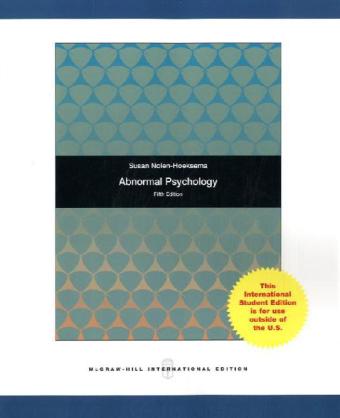 Authored by award-winning teacher and noted researcher Susan Nolen-Hoeksema, this text blends cutting-edge research in psychopathology with compassion for people who suffer from psychological disorders. Capturing the excitement of major advances in biological and psychosocial research and treatment alternatives, Abnormal Psychology imparts a true enthusiasm for and appreciation of scientific investigation. The author's scientific and caring approach, combined with strong study tools, has won accolades from instructors and students alike. This text includes Faces Interactive Case Studies, which link information about disorders covered in the text to Face Interactive Online, integrating the audio visual resources to the written text. The text continues to place great emphasis on an integrated approach to abnormal psychology, on making biological information clear to students, and on providing a strong focus on empirical research and diversity.

Susan Nolen-Hoeksema (19592013) In January 2013 we lost our esteemed author and friend, Susan Nolen-Hoeksema. Susan was a renowned scholar, teacher, mentor, and academic leader. She was recognized internationally for her work on how people regulate their feelings and emotions and how particular patterns of thinking can make people vulnerable to and recover slowly from emotional problems, especially depression. Her research shaped the fields perspective on depression in women and girls, and countless empirical studies and theoretical contributions followed as she developed her groundbreaking theory of rumination and depression. In her words: My career has focused on two parallel goals. The first is to use empirical methods to address important social and mental health problems (depression, rumination, womens mental health). The second goal is to disseminate psychological science. I also believe in taking science to the public, through my textbook on Abnormal Psychology and books for the general public on womens mental health. Susan taught at Stanford University, the University of Michigan, and Yale University.Susans work focused on depression, mood-regulation, and gender, for which she was recognized and received the David Shakow Early Career Award from Division 12, the Distinguished Leadership Award from the Committee on Women of American Psychological Association, the James McKeen Cattell Fellow Award from the Association for Psychological Science, a Research Career Award, and multiple grants from the National Institute of Mental Health. In addition, she was the founding editor of the Annual Review of Clinical Psychology, now the most highly cited journal in the field of clinical psychology. In addition to being an accomplished professor, scholar, teacher, and writer, Susan was a loving and devoted mother, wife, daughter, sister, friend, and mentor. Susan touched and inspired the lives of many people both professionally and personally, and she will be dearly missed.