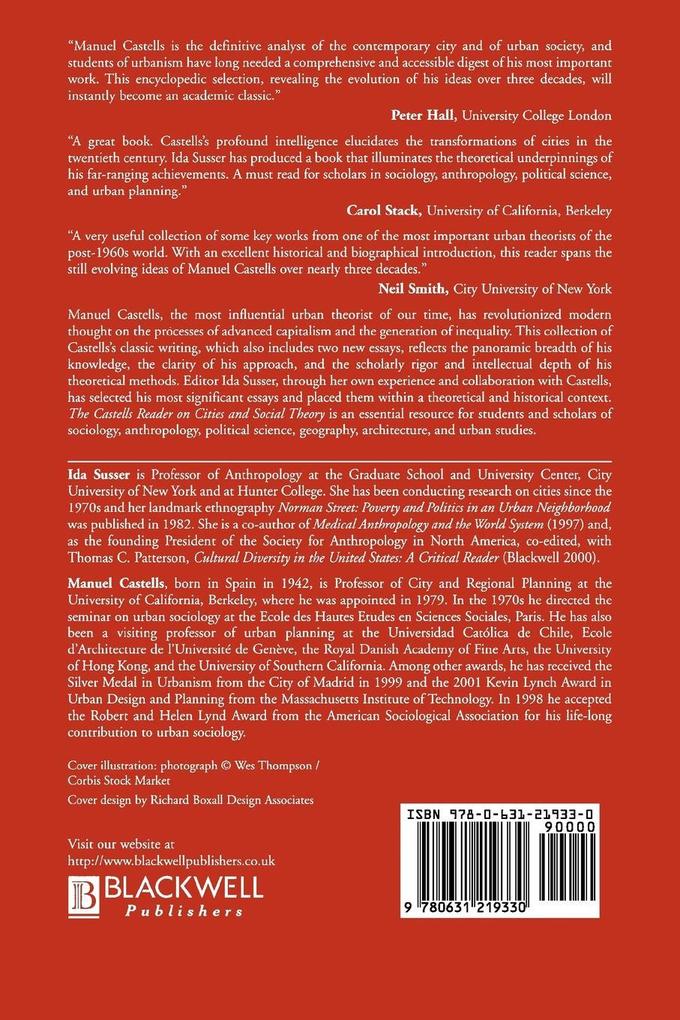 Collection of Castells most important writings on urban thought.

This collection of Castells' classic writing, which also includes two new essays written specifically for this book, reflects the panoramic breadth of his knowledge, the clarity of his approach, and the scholarly rigor and intellectual depth of his theoretical methods.

Part I: A Theoretical Approach to the City in Advanced Capitalism: .

The Historical Process of Urbanization.

The Myth of Urban Culture.

From Urban Society to Urban Revolution.

Part III: The City in the Information Age: .

6. The Informational Mode of Development and the Restructuring of Capitalism (1989).

7. Information Technology, the Restructuring of Capital-Labor Relationships and the Rise of the Dual City (1989).

Bibliography of Urban and Regional Studies by Manuel Castells, 1967-2000.

Ida Susser is Professor of Anthropology at Hunter College and the Graduate Center at the City University of New York. She was the founding President of the Society for the Anthropology of North America. She is the author of Norman Street: Poverty and Politics in an Urban Community (1982), co--author of Medical Anthropology and the World System (1997), and co--editor, with Thomas C. Patterson, of Cultural Diversity in the United States: A Critical Reader (Blackwell, 2000). Manuel Castells, born in Spain in 1942, is Professor of City and Regional Planning at the University of California, Berkeley, where he was appointed in 1979. In the 1970s he directed the seminar on urban sociology at the Ecole des Hautes Etudes en Sciences Sociales, Paris. He has also been a visiting professor of urban planning at the Universidad Catolica de Chile, Ecole da Architecture de la Universite de Geneve, the Royal Danish Academy of Fine Arts, the University of Hong Kong, and the University of Southern California. Among other awards, he has received the Silver Medal in Urbanism from the City of Madrid in 1999 and the 2001 Kevin Lynch Award in Urban Design and Planning from the Massachusetts Institute of Technology. In 1998 he accepted the Robert and Helen Lynd Award from the American Sociological Association for his life--long contribution to urban sociology.

"Manuel Castells is the definitive analyst of the contemporary city and of urban society, and students of urbanism have long needed a comprehensive and accessible digest of his most important work. This encyclopedic selection, revealing the evolution of his ideas over three decades, will instantly become an academic classic." Peter Hall, University College London

"A great book. Castells s profound intelligence elucidates the transformations of cities in the twentieth century. Ida Susser has produced a book that illuminates the theoretical underpinnings of his far-ranging achievements. A must read for scholars in sociology, anthropology, political science, and urban planning." Carol Stack, University of California, Berkeley

"A very useful collection of some key works from one of the most important urban theorists of the post-1960s world. With an excellent historical and biographical introduction, this reader spans the still evolving ideas of Manuel Castells over nearly three decades." Neil Smith, City University of New York

"this book will make an indispensable student text, and as such it is to be highly recommended." Gary Pattison, BSA Network, October 2002