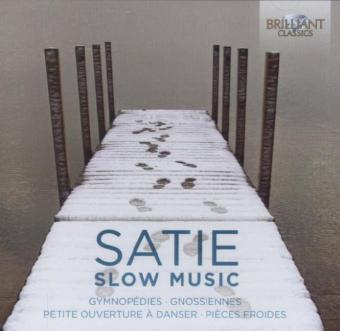 14% Rabatt sichern mit Gutscheincode: LIEBE14
​
"Open your head", "light as an egg" and "from the top of your back teeth": such phrases are only to be found in the scores of the eccentric Erik Satie, a composer born into a generation where 'only more could be more' - the post-Wagnerian age of rich … weiterlesen
Geschenk per Mail versenden
CD

"Open your head", "light as an egg" and "from the top of your back teeth": such phrases are only to be found in the scores of the eccentric Erik Satie, a composer born into a generation where 'only more could be more' - the post-Wagnerian age of richly furnished, intense music full of emotional layering. Expelled from the Paris Conservatoire for being its 'laziest student', Satie rebelled strongly against the musical climate in which he grew up, instead choosing to adopt a voice that did away with what he considered to be pretentious behaviour and which instead drew on irony through the use of free association, subtle dissonances and unexpected asides.

Such a stance - that music requires no extra layering, no showing-off, in order to touch its audience - ultimately resulted in ethereal-sounding compositions that are slow and solemn by nature. Pianist Jeroen van Veen has therefore taken it upon himself to exploit the concept of time in relation to the composer's works, stretching the durations of some of the Frenchman's most frequently performed pieces - including the Gymnopédies (a made-up word, incidentally) - to the max, and then going the extra mile: from slower to slowest, giving each note and each chord the chance to be absorbed fully. The result is that less actually becomes more; that duration is no longer of relevance, because the presence of sound is enough. Such music forces us to think outside the box, and 'maybe this is exactly what makes Satie's works timeless,' says van Veen, who presents the listener with a unique take on one of music history's most fascinating characters.

Other information:
- Recorded January 2013, Studio 1, Van Veen Productions, Culemborg, The Netherlands.
- The recent trend for "slow" (f.i. slow food as opposed to fast food) may also be applied to music, and most particularly to the music of Erik Satie, the French eccentric, who created his own most personal aesthetics. In his music slowness does not evoke boredom, but, on the contrary, creates more focus, tension, in short a new dimension.
- King of the Minimalists Jeroen van Veen chose the slowest music by Satie for this new recording, the Gymnopédies, Gnossiennes and Pieces froides, the result being like a slowly cooked pot-au-feu, exquisite and intense.
- New recordings, liner notes by the artist.