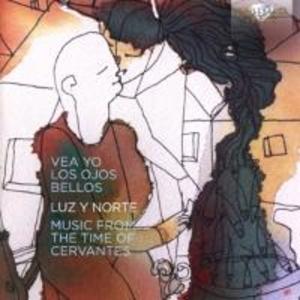 2016 has seen much commemoration around the 400th anniversary of the death of William Shakespeare. However, Shakespeare was not the only European writer to pass away in 1616 - in fact, his death on April 23rd of that year was preceded by just one day by that of his contemporary, the Spaniard Miguel de Cervantes. A novelist rather than a playwright, Cervantes is best known for the extraordinary work Don Quixote. This book, alongside many of his other works -including the Novelas ejemplares and La Galatea - form the backbone of Spanish literature. This release brings together a selection of songs for tenor by composers contemporary with Cervantes. The artists have chosen short extracts from works by Cervantes (printed alongside the sung texts in the CD booklet) to thematically link the songs together, drawing the listener into the musical world in which Cervantes lived and worked.

Luz y Norte ('Light and Guide') are a young Spanish ensemble, comprising a tenor, viola da gamba, harp and percussion, although the instrumentation varies according to the repertoire. All the members of the group are experienced both as soloists and as members of other prestigious early music groups. They have performed at numerous festivals, united by their shared desire to spread knowledge of the vocal and instrumental repertoire of Renaissance and Baroque Spain.

This fascinating programme is a homage to the literary genius from Madrid, Miguel Cervantes, on the occasion of the 400th anniversary of his death.
Presented are vocal works by some of the greatest composers of the Spanish Baroque, Marín, Del Vado, Parades, Duron, next to instrumental pieces by way of transition, all linked by extracts from a number of Cervantes' works, each of which evokes, in a variety of manner, the theme and character of the piece that can be heard immediately after it.
This is the CD debut of an exciting new group Luz y Norte, specialising in the research and performance of vocal and instrumental works from the Renaissance and Early Baroque, with a special focus on Spain. The group consists of a tenor, historical harp, viola da gamba and percussion.
The complete texts in original language are included in the booklet.

Recorded in Alconadilla, Segovia, Spain, in September 2015.
Contains liner notes written by the artists.
Contains the sung texts in Spanish alongside extracts from works by Miguel de Cervantes.