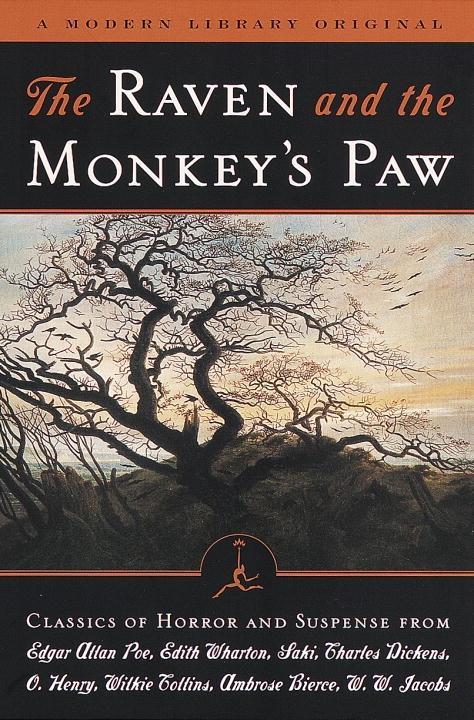 The Raven and the Monkey's Paw

The third in the Modern Library's series of original compilations, The Raven and the Monkey's Paw is a collection of classic tales and poems to engage our fear-seeking senses. The beauty of these stories and poems lies in their readability: ideal for … weiterlesen
Dieser Artikel ist auch verfügbar als:
Geschenk per Mail versenden
eBook epub


Format:  EPUB
Classics of Horror and Suspense from the Modern Library.
Sprache: Englisch.

The third in the Modern Library's series of original compilations, The Raven and the Monkey's Paw is a collection of classic tales and poems to engage our fear-seeking senses. The beauty of these stories and poems lies in their readability: ideal for sharing aloud around the campfire or for a quick, thrilling dip . . . under the covers with a flashlight. The writing itself sends as many awe-inspired shivers down the spine as do the ghosts and goblins on these pages.

Edgar Allan Poe, the master of the horror story and the chiming lyric poem, opens the volume with his best-loved stories: "The Murders in the Rue Morgue," "The Black Cat," "The Fall of the House of Usher," "The Pit and the Pendulum," "The Premature Burial," "The Tell-Tale Heart," "Berenice," and "Ligeia." Every bit as chilling now as on the day they were written, these tales retain their power to stir the reader again and again. Poe, who was as well known for his poems as for his stories, is also represented by such verse standards as "The Raven," "Lenore," "To Helen," "Ulalume," and "Annabel Lee," among others.

Numerous other practitioners of the supernatural story are included: Edith Wharton, with her gripping "Afterward"; Charles Dickens and his famed ghost story "The Signalman"; W. W. Jacobs, with this compilation's inspiration, "The Monkey's Paw." Also here are Saki's engrossing "Sredni Vashtar"; O. Henry's story of love lost and hopes dashed, "The Furnished Room"; Wilkie Collins's lively "A Terribly Strange Bed"; and "The Boarded Window," Ambrose Bierce's tale of the bizarre.

A year-round collection for reading aloud-and frightening your friends-The Raven and the Monkey's Paw will gratify all manner of thrill-seekers.

Charles Dickens was born in England in 1812, and grew up in a family frequently beset by financial insecurity. When the family fortunes improved, Dickens went back to school and became a freelance reporter and eventually an author. He quickly became a popular and respected writer of his time, and authored some of the most recognized classics in English literature, including Oliver Twist, Great Expectations, and A Christmas Carol.

O. Henry is the pseudonym of William Sydney Porter (1862-1910) and the name under which he published all of his work, which includes a novel and some 300 short stories. His talent for vivid caricature, local tone, narrative agility, and compassion tempered by irony made him a vastly popular writer in the last decade of his life.

Edgar Allan Poe was born in 1809 in Boston, the son of traveling actors. He published his first book of poems, Tamerlane and Other Poems, in 1827, but he did not achieve appreciable recognition until the publication of "The Raven" in 1845. He died in 1849.

Edith Wharton (1862-1937) was born into a distinguished New York family and was privately educated in America and abroad. In 1905 she published The House of Mirth and two years later moved to France. Author of Ethan Frome and many other novels, she won the Pulitzer Prize in 1920 for The Age of Innocence.

Saki is the pen name of Hector Hugh Munro (1870-1916). After working as a foreign correspondent for in the Balkans, Russia, and Paris, Munro settled in London in 1908 and began publishing the short stories and sketches, for which he is remembered. Munro was 43 years old when World War I began, and joined the army as an ordinary trooper. He was killed in France by a German sniper at the age of 46.