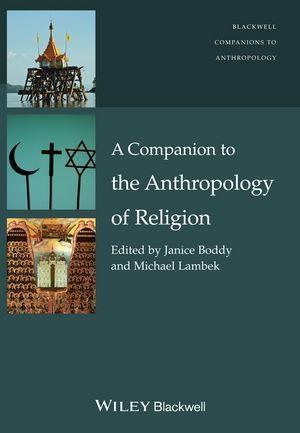 A Companion to the Anthropology of Religion

A Companion to the Anthropology of Religion presents acollection of original, ethnographically-informed essays thatexplore the variety of beliefs, practices, and religiousexperiences in the contemporary world and asks how to think aboutreligion as a … weiterlesen
Dieser Artikel ist auch verfügbar als:
Geschenk per Mail versenden
eBook pdf

Titel: A Companion to the Anthropology of Religion

A Companion to the Anthropology of Religion presents acollection of original, ethnographically-informed essays thatexplore the variety of beliefs, practices, and religiousexperiences in the contemporary world and asks how to think aboutreligion as a subject of anthropological inquiry.
* Presents a collection of original, ethnographically-informedessays exploring the wide variety of beliefs, practices, andreligious experiences in the contemporary world
* Explores a broad range of topics including the'perspectivism' debate, the rise of religiousnationalism, reflections on religion and new media, religion andpolitics, and ideas of self and gender in relation to religiousbelief
* Includes examples drawn from different religious traditions andfrom several regions of the world
* Features newly-commissioned articles reflecting the mostup-to-date research and critical thinking in the field, written byan international team of leading scholars
* Adds immeasurably to our understanding of the complexrelationships between religion, culture, society, and theindividual in today's world

Rita Astuti is Professor of Anthropology at the London School of Economics. She has undertaken fieldwork among the Vezo of Madagascar. In her most recent work, she has investigated how Vezo children and adults categorize the social world into distinct kinds of people, and how they conceptualize death and the afterlife.

Ellen Badone is a Professor in the Department of Anthropology and the Department of Religious Studies at McMaster University. She works in Brittany and at Les-Saintes-Maries-de-la-Mer, in southern France. Her publications include The Appointed Hour: Death, Worldview and Social Change in Brittany (1989), Religious Orthodoxy and Popular Faith in European Society (1990) and Intersecting Journeys: The Anthropology of Pilgrimage and Tourism (2004, co-edited with Sharon R. Roseman).

Maurice Bloch is Emeritus Professor of Anthropology at the London School of Economics. His research has concerned Madagascar and a variety of theoretical issues in anthropology and cognitive science. His two most recent books are: Anthropology and the Cognitive Challenge (2012) and Going in and Out of Each other's Bodies (2012).

Janice Boddy is Professor of Anthropology, University of Toronto. Her books include Wombs and Alien Spirits: Women, Men and the Zar Cult in Northern Sudan (1989), Aman: The Story of a Somali Girl (1994), and Civilizing Women: British Crusades in Colonial Sudan (2007). She is a Fellow of the Royal Society of Canada, and was Chair of the Department of Anthropology at the University of Toronto from 2006 to 2012.

Tom Boylston is a British Academy Postdoctoral Fellow in anthropology at the London School of Economics and Political Science. He has conducted fieldwork on Ethiopian Orthodox Christianity in rural northern Ethiopia and in Addis Ababa.

Simon Coleman is Chancellor Jackman Chair at the Department for the Study of Religion, University of Toronto. Among his publications are Pilgrimage Past and Present: Sacred Travel and Sacred Space in the World Religions (with J. Elsner, 1995), Pilgrim Voices: Narrative and Authorship in Christian Pilgrimage (edited with J. Elsner, 2002), and Reframing Pilgrimage: Cultures in Motion (edited with J. Eade, 2004). He is coeditor and cofounder of the journal Religion and Society and cofounder of the Ashgate Studies in Pilgrimage book series.

Veena Das is Krieger-Eisenhower Professor of Anthropology and Professor of Humanities at the Johns Hopkins University, Her most recent books are Life and Words: Violence and the Descent into the Ordinary (2007) and a coedited book, Philosophy and Anthropology: Affinities and Antagonisms (forthcoming). Das is a Fellow of the American Academy of Arts and Sciences and of the Academy of Scientists from the Developing World and is a recipient of an honorary doctorate from the University of Chicago.

Girish Daswani is an Assistant Professor in Anthropology at the University of Toronto, with a special interest in the anthropologies of religion, Christianity, and ethics, as well as diaspora and transnationalism. His work focuses on religious change in Ghana, and he has conducted research with members of a Pentecostal church in
southern Ghana and London.

Filip De Boeck is a Professor of Anthropology at the Institute for Anthropological Research in Africa, at the University of Leuven. Since 1987 he has conducted extensive field research in both rural and urban communities in D.R. Congo (ex-Zaire). His current theoretical interests include the transformation of private and public space in the urban context in Africa. In 2010 De Boeck released Cemetery State, a 70-minute long documentary film about a graveyard in Congo's capital.

Philippe Descola is a social anthropologist specializing in the ethnology of Amazonia, focusing on the relations of native societies with their environment. He holds the Chair of “Anthropology of Nature” at the Collège de France, Paris, where he heads the Laboratoire d'Anthropologie Sociale. He is the author of Les idées de l'anthropologie (1988), In the Society of Nature (1994), The Spears of Twilight (1996), Par-delà nature et culture (2005, forthcoming in English), La fabrique des images (2010), L'écologie des autres (2011, forthcoming in English), and coeditor of Dictionnaire de l'ethnologie et de l'anthropologie (1991), Nature and Society (1996), and La production du social (1999). He is a Fellow of the British Academy and a member of the American Academy of Arts and Sciences.

William F. Hanks is Professor of Anthropology and Berkeley Distinguished Chair in Linguistic Anthropology at University of California Berkeley. He is also Director of the Institute for Integrative Social Science at Berkeley. He is a specialist in the language, culture, and history of the Maya of Yucatan and works on ritual practice, colonial histories, and the grammar and pragmatics of Maya. He is the author of Converting Words, Maya in the Age of the Cross (2010).

Wendy James is Eme
ritus Professor of Social Anthropology, University of Oxford, and has also taught in the universities of Khartoum, Aarhus, and Bergen. She has a special interest in the place of religion within anthropology. Her key book in this area is The Ceremonial Animal (2003). Her ethnographic research has been focused on the borderlands between Sudan, South Sudan, and Ethiopia. Her most recent book on this region is War and Survival in Sudan’s Frontierlands: Voice from the Blue Nile (2009).

Seong-nae Kim is Professor of Religious Studies at Sogang University in Korea, and also editor-in-chief of the Journal of Korean Religions, published by the Institute for the Study of Religion. Her research and writing focuses on popular memory and religion, ritual studies, and gender studies.

Jeanne Kormina is Professor of Anthropology and Religious Studies at the Department of Sociology, Higher School of Economics (St Petersburg, Russia). Her books in Russian include Rituals of Departure to the Military Service in Late Imperial Russia (2005) and Dreams of the Mother of God co-edited with S. Shtyrkov and A. Panchenko (2006).

Heonik Kwon is Professorial Senior Research Fellow in Social Science at Trinity College, University of Cambridge, and previously taught anthropology at the London School of Economics. His recent research focuses on the role of religious morality in postconflict social development. Currently he is preparing a history of ecological id
eas in comparative sociology.

James Laidlaw teaches anthropology at the University of Cambridge. He has conducted research in India, Bhutan, Inner Mongolia, and Taiwan, and his publications include The Archetypal Actions of Ritual (with Caroline Humphrey), The Essential Edmund Leach (with Stephen Hugh-Jones), and Religion, Anthropology, and Cognitive Science (with Harvey Whitehouse).

Michael Lambek holds a Canada Research Chair in the Department of Anthropology, University of Toronto Scarborough. He is the author of Human Spirits; Knowledge and Practice in Mayotte; and The Weight of the Past; and editor of several books, including Ordinary Ethics and A Reader in the Anthropology of Religion.

Birgit Meyer is Professor of Religious Studies at Utrecht University. She has conducted anthropological and historical research on religion in Ghana. Her main research foci are the rise and popularity of global Pentecostalism; religion, popular culture and heritage; religion and media; religion and the public sphere; religious visual culture, the senses, and aesthetics.

Amira Mittermaier is Associate Professor in the Department for the Study of Religion and the Department of Near and Middle Eastern Civilization at the University of Toronto. She is the author of the award-winning book Dreams That Matter: Egyptian Landscapes of the Imagination. Her current project revolves around Islamic charity practices in (post)revolutionary Egypt.

Andrea Muehlebach is an Assistant Professor of Anthropology at the University of Toronto. She is the author of The Moral Neoliberal: Welfare and Citizenship in Italy.

Michael G. Peletz is Professor of Anthropology at Emory University. His books include Gender...

eBook pdf
A Companion to Paleopathology

eBook pdf
A Companion to the Anthropology of…

eBook pdf
A Companion to the Anthropology of Japan

Schreiben Sie eine Bewertung für: A Companion to the Anthropology of Religion