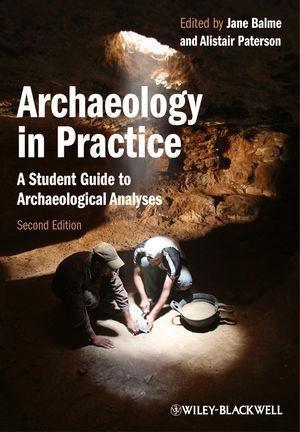 This much-enhanced new edition of the highly accessible guide topractical archaeology is a vital resource for students. Itfeatures the latest methodologies, a wealth of case studies fromaround the world, and contributions from leading specialists inarchaeological materials analysis.
* New edition updated to include the latest archaeologicalmethods, an enhanced focus on post-excavation analysis and newmaterial including a dedicated chapter on analyzing humanremains
* Covers the full range of current analytic methods, such asanalysis of stone tools, human remains and absolute dating
* Features a user-friendly structure organized according tomaterial types such as animal bones, ceramics and stone artifacts,as well as by thematic topics ranging from dating techniques toreport writing, and ethical concerns.
* Accessible to archaeology students at all levels, with detailedreferences and extensive case studies featured throughout

Jane Balme is a Professor in Archaeology at the University of Western Australia. She has been teaching undergraduate and graduate students in Australian universities for 20 years. Areas of research and publication include the archaeology of hunter–gatherer societies (especially subsistence) and Australian Indigenous archaeology.


Anthony Barham is convenor of the Masters of Archaeological Science Program at the Australian National University, having previously lectured in Geoarchaeology at the Institute of Archaeology, University College London. His research and teaching is cross-disciplinary and international in focus, studying sediments and stratigraphy on diverse urban development and mine sites, tells, middens, and Holocene shorelines. He has long-standing career foci in applied geoarchaeological practice in archaeological mitigation, coastal geoarchaeology, and the role of Quaternary stratigraphic architectures in determining the preserved archaeological record.


James Barrett is Deputy Director of the McDonald Institute for Archaeological Research and Reader in Medieval Archaeology at the University of Cambridge, United Kingdom. His particular research interests are the “long” Viking Age, political economy, migration, and the comparative study of maritime societies. Recent publications include Being an Islander, based on his work at Quoygrew, Orkney.


Wendy Beck is an Associate Professor in Archaeology at the University of New England in New South Wales. Her recent research and teaching interests include hunter–gatherer subsistence, especially plant food resources, and Indigenous and community archaeology and archaeological education. Her publications include articles in Economic Botany, Journal of Archaeological Science, and Australian Aboriginal Studies, and she coedited the book Plants in Australian
Archaeology.


Sandra Bowdler is Emeritus Professor of Archaeology at the University of Western Australia. She has long been interested in coastal archaeology and hence midden analysis, having published an earlier paper of which this is a revised version (“Sieving seashells: midden analysis in Australian archaeology,” in G. E. Connah (ed.) Australian Archaeology: a Guide to Field Techniques, 1983). She is also the author of Hunter Hill, Hunter Island which describes her research in Tasmania, and numerous articles on her research at Shark Bay in Western Australia.


Kelly M. Branam, PhD, is an Associate Professor of Anthropology at Saint Cloud State University (SCSU). In addition to teaching undergraduate cultural anthropology courses, she teaches and works with graduate students in SCSU's Cultural Resource Management Master's program. Her ethnographic dissertation research on Crow Indian politics instigated research concerning the contentious relationship between the Yellowtail Dam, the Bighorn Canyon National Recreation Area (NRA) (which was created as a result of the dam), and the Crow Indian community. She has been an instructor for several different archaeological field projects that have taken place in the Bighorn Canyon NRA. These field projects bring archaeologists, anthropologists, students, and tribal community members together for collaboration on cultural resource preservation.


Chris Clarkson is a Senior Lecturer and QEII Fellow in the School of Social Science, The University of Queensland. He is an expert in lithic analysis and works in various regions, including Australia, Africa, India, and Southeast Asia. His current research revolves around understanding the dispersal of modern humans out of Africa to Arabia, India, Asia, and Australian, as well as behavioral and cognitive similarities and differences between modern humans and Neanderthals. Chris is also working on dev
eloping better quantitative methods of lithic analysis and testing hypotheses about the evolution of technology through archaeology, theory, and experiment.


Emilie Dotte-Sarout is an Archaeobotanist at the University of Western Australia. She completed her cotutelle PhD in 2010 at the Australian National University and Sorbonne University. She researches the relationships between people and forests in the Pacific through the analysis of wood charcoal macro­remains. These are directly related to issues of landscape changes, arboricultural practices, or plant introduction and domestication. She has also been working on enhancing resources on the anatomy of woody taxa from Australasia and promoting the development of anthracology in the region. Results of her doctoral research have recently been published as book chapters or articles in various volumes related to Pacific Archaeology.


Linda Ellis is Senior Curator of the University Museum and Professor/Founding Director of the Museum Studies Program at San Francisco State University. Her books include Archaeological Method and Theory: An Encyclopedia. Areas of research and publication include laboratory methods in archaeology, museum professional practices, and archaeology of Eastern Europe from prehistory to Late Antiquity.


Richard Fullagar is Honorary Principal Research Fellow in the Centre for Archaeological Science, School of Earth and Environmental Science, University of Wollongong, Australia, and a Director of Scarp Archaeology. He has recently published papers in Science, Quaternary International, Archaeology in Oceania, and Antiquity on early utilization of starchy plants in Papua New Guinea and China, stone technology, and Australian prehistory. Current interests include initial colonization of Australia, megafaunal extinctions, and the history of plant food processing.


Simon Holdaway is a Professo
r in the Department of Anthropology, The University of Auckland. His research interests include the arid zone and coastal archaeology of Australia, the Neolithic of Egypt, and the historical archaeology of New Zealand. He has written extensively on stone artifact analysis and human environmental interaction.


Gary Huckleberry is an Adjunct Research Associate, Department of Geosciences, University of Arizona. His specialties are geoarchaeology and geomorphology, and he has published in several journals, including American Antiquity, Journal of Field Archaeology, Geology, and Quaternary Research. He is coeditor of Geoarchaeology: An International Journal.


Susan Lawrence is an Associate Professor in Archaeology at La Trobe University, Melbourne, and a past president of the Australasian Society for Historical Archaeology. She is the author (with Peter Davies) of An Archaeology of Australia Since 1788. Other publications include Dolly's Creek: Archaeology and History of a Victorian Goldfields Community and Archaeologies of the British.


Barbara J. Little is an archaeologist with the US National Park Service in Washington, DC, and Adjunct Professor at the University of Maryland. Her interests include public benefits of archaeology and citizen engagement via heritage. Her recent publications include the books Historical Archaeology: Why the Past Matters and Archaeology as a Tool of Civic Engagement, coedited with Paul A. Shackel.


Jo McDonald has been recording Australian rock art for over 30 years. While being a career consultant, she has also held a research position at the Australian National University. She was Principal Investigator on the Canning Stock Route Project (rock art and Jukurrpa) and is now an ARC Future Fellow, comparing desert rock art in Australia and North America. She has published widely on information-e
xchange theory, gender, and rock art management, and has been involved in national and World Heritage nominations for rock art provinces. She is the Director of the Centre for Rock Art Research + Management at the University of Western Australia, and holds the endowed Rio Tinto Chair in Rock Art Studies.


Sue O'Connor is an Australian Research Council Laureate Fellow in the Australian National University's College of Australia and the Pacific, researching modern human dispersal, adaptation, and behavior en route to Australia. Her research interests in Australia and Island Southeast Asia are reflected in her publications and books East of Wallace's Line Studies of Past and Present Maritime Cultures of the Indo-Pacific Region (with P. Veth) and 30,000 Years of Aboriginal Occupation, Kimberley, North West Australia.


Terry O'Connor is Professor of Archaeological Science at the University of York, United Kingdom. His books include The Archaeology of Animal Bones, Environmental Archaeology, Principles and Methods (with J. G. Evans), and volumes in the Archaeology of York series. Interests and publications range across zooarchaeology, particularly bone taphonomy and human–animal behavioral coevolution.


Alistair Paterson is a Professor of Archaeology and Head of the School of Social Sciences at the University of Western Australia. His research and teaching covers culture contact, historical archaeology in maritime and terrestrial settings, European colonization, historical rock art, and archaeological and historical methodology. He is the author of A Millennium of Cultural Contact (Left Coast, 2011), and The Lost Legions: Culture Contact in Colonial Australia (AltaMira, 2008). He is past President of the Australian Archaeological Association (2005–2007), and has been involved with editing for, and...