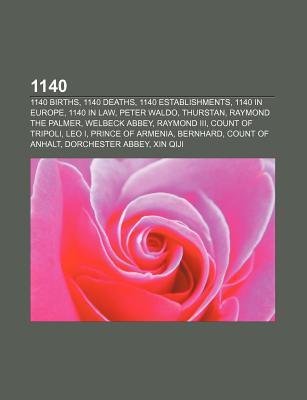 Source: Wikipedia. Pages: 28. Chapters: 1140 births, 1140 deaths, 1140 establishments, 1140 in Europe, 1140 in law, Peter Waldo, Thurstan, Raymond the Palmer, Welbeck Abbey, Raymond III, Count of Tripoli, Leo I, Prince of Armenia, Bernhard, Count of Anhalt, Dorchester Abbey, Xin Qiji, Newbattle Abbey, Sobeslaus I, Duke of Bohemia, Bristol Cathedral Choir School, Aibert, Assizes of Ariano, Kitti Sri Megha, Sophia of Minsk, Hardehausen Abbey, Siege of Weinsberg, Alan fitz Walter, 2nd High Steward of Scotland, List of state leaders in 1140, Abd as-Salam ibn Mashish al-Alami, Coggeshall Abbey, St Andrews Cathedral Priory, Simon II, Duke of Lorraine, Whitland Abbey, Louis I, Landgrave of Thuringia, Saint Gaucherius, Manfred II, Marquess of Saluzzo, John of Ford, Wulgrin II, Count of Angoulême, Eberhard I, Count of Berg-Altena, Richard III of Gaeta, Baldwin of Rieti, Yusuf Hamdani, Minamoto no Yoshihira, Mohammed ibn Qasim al-Tamimi, Kumarapala, William de Beaumont, 3rd Earl of Warwick, Lhachen Naglug, Toba Sojo, Hugh the Chanter, Tickford Priory. Excerpt: Thurstan or Turstin of Bayeux (c. 1070 - 6 February 1140) was a medieval Archbishop of York, the son of a priest. He served kings William II and Henry I of England before his election to the see of York in 1114. Once elected, his consecration was delayed for five years while he fought attempts by the Archbishop of Canterbury to assert primacy over York. Eventually, he was consecrated by the pope instead and allowed to return to England. While archbishop, he secured two new suffragan bishops for his province. When Henry I died, Thurstan supported Henry's nephew Stephen of Blois as king. Thurstan also defended the northern part of England from invasion by the Scots, taking a leading part in organizing the English forces at the Battle of the Standard (1138). Shortly before his death, Thurstan resigned from his see and took the habit of a Cluniac monk. Thurstan was the son of a canon of St Paul's in London named Anger, Auger or Ansgar, who held the prebend of Cantlers. Another son of Anger, Audoen, was later Bishop of Évreux. Thurstan's mother was named Popelina. Thurstan was born sometime about 1070 in the Bessin region of Normandy. Before 1104 the father was given the prebend of Cantlers by Maurice, Bishop of London, and the family moved to England. The Abbey of Cluny, where Thurstan visited and vowed to become a monk at some point in his life.Early in his career, Thurstan held the prebendary of Consumpta in the diocese of London, and served both William Rufus and Henry I as a royal clerk. At some point in Thurstan's early career, he visited Cluny, where he vowed to become a Cluniac monk later in his life. Thurstan also served Henry as almoner, and it was Henry who obtained Thurstan's election as Archbishop of York in August 1114. He was ordained a deacon in December 1114 and ordained a priest on 6 June 1115 by Ranulf Flambard, who was Bishop of Durham. Henry I of England, from Cassell's History of England c. 1902The Archbishop of Canterbury, Ralph d'Escures, refused