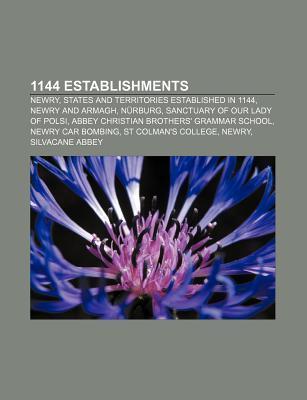 Source: Wikipedia. Pages: 30. Chapters: Newry, States and territories established in 1144, Newry and Armagh, Nürburg, Sanctuary of Our Lady of Polsi, Abbey Christian Brothers' Grammar School, Newry car bombing, St Colman's College, Newry, Silvacane Abbey, Newry and Mourne District Council, Newry City F.C., 1985 Newry mortar attack, Newry Democrat, Belfast-Newry railway line, Commune of Rome, Newry Canal, Newry Cathedral, The Troubles in Newry, St. Colman's Abbey Christian Brothers' Primary School, Páirc Esler, Newry railway station, Newry River, Five FM, Woodwalton Castle, Newry Reporter, Newry and Armagh by-election, 1986, MacNeill's Egyptian Arch, Newry RFC, Daisy Hill Hospital, John Mitchel GFC, Altenburg Abbey, Sacred Heart Grammar School, Saint Patrick's, Newry, Newry High School, Taifa of Santarém, Newry Town Hall, Windsor Hill Primary School, Our Lady's Grammar School, The Showgrounds, Newry Bosco GFC, St. Joseph's Boys' High School, Newry, St John's Primary School, Newry, Shingay Preceptory. Excerpt: Newry ( ; from Irish: Iúr Cinn Trá meaning "yew at the strand's head" - often shortened to An tIúr) is a city in Northern Ireland. The River Clanrye, which runs through the city, forms the historic border between County Armagh and County Down. It is 34 miles (55 km) from Belfast and 67 miles (108 km) from Dublin. Newry (together with Bessbrook) had a population of 27,433 at the 2001 Census, while Newry and Mourne Council Area had a population of 87,058. Newry was founded in 1144 alongside a Cistercian monastery and is one of Northern Ireland's oldest towns. The city of Newry is one of the constituent cities of the Dublin-Belfast corridor and sits at the entry to the "Gap of the North", close to the border with the Republic of Ireland. It grew as a market town and a garrison and became a port in 1742 when it was linked to Lough Neagh by the first summit-level canal in Britain or Ireland. In March 2002, as part of Queen Elizabeth's Golden Jubilee celebrations, Newry was granted city status alongside Lisburn. Despite being the fourth largest city in Northern Ireland, however, it is not the fourth largest settlement. Newry has long been an important centre of trade because of its position between Belfast and Dublin. Newry lies in the most south-eastern part of both Ulster and Northern Ireland. Approximately half of the city lies in County Down and the other half in County Armagh. The Local Government (Ireland) Act 1898 made all of Newry part of County Down, but this Act has since been repealed. The city sits in a valley, nestled between the Mourne Mountains to the east, and the Ring of Gullion to the south-west, both of which are designated Areas of Outstanding Natural Beauty. Newry also lies in the shadow of the Cooley Mountains to the south east. The Clanrye River runs through the centre of town, parallel to the canal. The city also lies at the extreme northernmost end of Carlingford Lough, where the canal enters the sea at Victoria Locks. A view over Newry, from nea