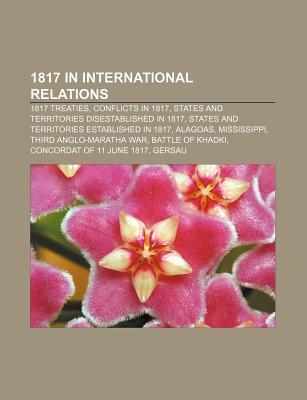 Source: Wikipedia. Pages: 38. Chapters: 1817 treaties, Conflicts in 1817, States and territories disestablished in 1817, States and territories established in 1817, Alagoas, Mississippi, Third Anglo-Maratha War, Battle of Khadki, Concordat of 11 June 1817, Gersau, List of sovereign states in 1817, Pernambucan Revolt, List of state leaders in 1817, Battle of Chacabuco, Crossing of the Andes, Principality of Serbia, Rush-Bagot Treaty, Uva Rebellion, Alabama Territory, Treaty of Titalia, Ndwandwe-Zulu War, Tonk, Battle of Claremore Mound, Battle of la Tablada de Tolomosa, Battle of Mahidpur, Battle of Curapalihue, List of colonial governors in 1817, Amelia Island Affair, Bapu Gokhale, Balaji Pant Natu, Treaty of Fort Meigs, Patria Nueva, Treaty of Poona. Excerpt: Mississippi () is a U.S. state located in the Southern United States. Jackson is the state capital and largest city. The name of the state derives from the Mississippi River, which flows along its western boundary, whose name comes from the Ojibwe word misi-ziibi ("Great River"). The state is heavily forested outside of the Mississippi Delta area, and its catfish aquaculture farms produce the majority of farm-raised catfish consumed in the United States. The state symbol is the magnolia grandiflora tree. Mississippi is bordered on the north by Tennessee, on the east by Alabama, on the south by Louisiana and a narrow coast on the Gulf of Mexico and on the west, across the Mississippi River, by Louisiana and Arkansas. Major rivers in Mississippi, apart from its namesake, include the Big Black River, the Pearl River, the Yazoo River, the Pascagoula River, and the Tombigbee River. Major lakes include Ross Barnett Reservoir, Arkabutla Lake, Sardis Lake and Grenada Lake. The largest lake in Mississippi is Grenada Lake. Mississippi State MapThe state of Mississippi is entirely composed of lowlands, the highest point being Woodall Mountain, in the foothills of the Cumberland Mountains, 806 feet (246 m) above sea level. The lowest point is sea level at the Gulf coast. The mean elevation in the state is 300 feet (91 m) above sea level. Most of Mississippi is part of the East Gulf Coastal Plain. The Coastal Plain is generally composed of low hills, such as the Pine Hills in the south and the North Central Hills. The Pontotoc Ridge and the Fall Line Hills in the northeast have somewhat higher elevations. Yellow-brown loess soil is found in the western parts of the state. The northeast is a region of fertile black earth that extends into the Alabama Black Belt. The coastline includes large bays at Bay St. Louis, Biloxi and Pascagoula. It is separated from the Gulf of Mexico proper by the shallow Mississippi Sound, which is partially sheltered by Petit Bois Island, Horn Island, E