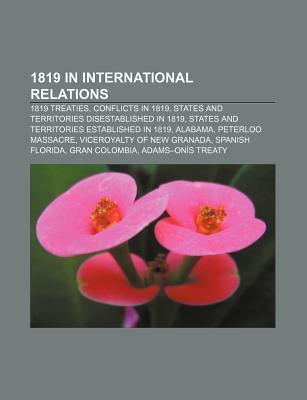 Source: Wikipedia. Pages: 38. Chapters: 1819 treaties, Conflicts in 1819, States and territories disestablished in 1819, States and territories established in 1819, Alabama, Peterloo Massacre, Viceroyalty of New Granada, Spanish Florida, Gran Colombia, Adams-Onís Treaty, List of sovereign states in 1819, List of state leaders in 1819, Battle of Shopian, Arkansas Territory, Battle of Boyacá, Bolívar's campaign to liberate New Granada, Shaki Khanate, Battle of Píleo, Battle of Las Queseras del Medio, Ndwandwe-Zulu War, Treaty of Saginaw, Öland County, Chuguev Uprising, List of colonial governors in 1819. Excerpt: Alabama () is a state located in the southeastern region of the United States of America. It is bordered by Tennessee to the north, Georgia to the east, Florida and the Gulf of Mexico to the south, and Mississippi to the west. Alabama ranks 30th in total land area and ranks second in the size of its inland waterways. The state ranks 23rd in population with 4.7 million residents in 2009. From the American Civil War until World War II, Alabama, like many Southern states, suffered economic hardship, in part because of continued dependence on agriculture. Despite the growth of major industries and urban centers, white rural interests dominated the state legislature until the 1960s, while urban interests and African Americans were under-represented. Following World War II, Alabama experienced growth as the economy of the state transitioned from agriculture to diversified interests in heavy manufacturing, mineral extraction, education, and technology. In addition, the establishment or expansion of multiple military installations, primarily those of the U.S. Army and U.S. Air Force, added to state jobs. Alabama is unofficially nicknamed the Yellowhammer State, after the state bird. Alabama is also known as the "Heart of Dixie". The state tree is the Longleaf Pine, the state flower is the Camellia. The capital of Alabama is Montgomery. The largest city by population is Birmingham. The largest city by total land area is Huntsville. The oldest city is Mobile, founded by French colonists. The Alabama (people), a Muskogean-speaking tribe whose members lived just below the confluence of the Coosa and Tallapoosa Rivers on the upper reaches of the Alabama River, served as the etymological source of the names of the river and state. In the Alabama language, the word for an Alabama person is Albaamo (or variously Albaama or Albàamo in different dialects; the plural form "Alabama persons" is Albaamaha). The word Alabama is believed to have originated from the Choctaw language and was