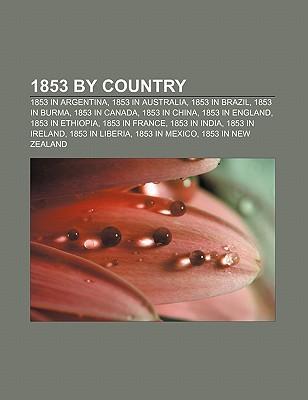 Source: Wikipedia. Pages: 48. Chapters: 1853 in Argentina, 1853 in Australia, 1853 in Brazil, 1853 in Burma, 1853 in Canada, 1853 in China, 1853 in England, 1853 in Ethiopia, 1853 in France, 1853 in India, 1853 in Ireland, 1853 in Liberia, 1853 in Mexico, 1853 in New Zealand, 1853 in Norway, 1853 in South Africa, 1853 in international relations, 1853 in the United Kingdom, 1853 in the United States, 1856 in Argentina, Gadsden Purchase, Argentine Constitution of 1853, Elliott Cutoff, Massachusetts Constitutional Convention of 1853, List of sovereign states in 1853, Hochster v De La Tour, List of state leaders in 1853, 4th Parliament of the Province of Canada, Queenstown, Eastern Cape, Cincinnati Riot of 1853, Aberdeen Railway Co v Blaikie Brothers, Second Anglo-Burmese War, Great Industrial Exhibition, North Pacific Exploring and Surveying Expedition, 19th General Assembly of Nova Scotia, White v Bluett, Norwalk rail accident, Bendigo Petition, Gavazzi Riots, Koszta Affair, Republic of Sonora, Lumley v Gye, New Zealand general election, 1853, 15th New Brunswick Legislative Assembly, September 6, 1853 cabinet, Exhibition of the Industry of All Nations, 1853 in Wales, St Kilda Road robberies, Inauguration of Franklin Pierce, Battle of Nanjing, Battle of Takusa, 1853 English cricket season, 1856 Argentina-Chile treaty, Battle of Ayshal, Texas gubernatorial election, 1853, Liberian general election, 1853, List of colonial governors in 1853. Excerpt: The Argentine Constitution of 1853 was the first constitution of Argentina, approved with the support of the governments of the provinces -though without that of the Buenos Aires Province, who remained separated of the Argentine Confederation until 1859, after several modifications to the original constitution- sanctioned on May 1853 by the Constitutional Convention gathered in Santa Fe, and promulgated by the head of the national executive government Justo José de Urquiza. In spite of a number of reforms of different importance, the 1853 constitution is still substantially the base of the current Argentine juridical system. It was closely inspired by the juridical and political doctrines of the United States federal Constitution, establishing for instance a Republican division of powers, a high level of independence for the provinces, and a federal power controlled by a strong executive government yet limited by a bicameral national congress to equilibrate the population's representation with equity among the provinces. The model, elaborated by the constitutional deputies from the precedent constitutional attempts and the pioneer work of Juan Bautista Alberdi, has been the target of repeated critics; the mechanism of federal model has been objected, and its true effectiveness has been questioned for being based in foreign experiences instead of following the peculiar Argentine History, far different from the North American colonialism by the British. Nevertheless, the historical importance of the constitutional project has been unquestionable, and virtually all disputes regarding the political theory and practice in modern Argentina include an either positive or negative reference on the political consequences of the 1853 constitution. For the Generation of '80, the settlers of the first liberal conventions on Argentine historiography, the constitution represented a true foundational act that broke the long government of Juan Manuel de Rosas. The members of the Gen