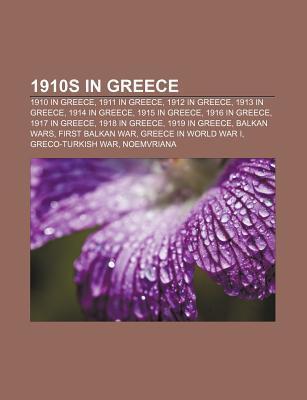 Source: Wikipedia. Pages: 82. Chapters: 1910 in Greece, 1911 in Greece, 1912 in Greece, 1913 in Greece, 1914 in Greece, 1915 in Greece, 1916 in Greece, 1917 in Greece, 1918 in Greece, 1919 in Greece, Balkan Wars, First Balkan War, Greece in World War I, Greco-Turkish War, Noemvriana, Macedonian front, Serbia in the Balkan Wars, Greece in the Balkan Wars, Massacres of Albanians in the Balkan Wars, Balkan League, Battle of Bizani, Hellenic Naval Air Service, Battle of Doiran, Greece at the 1912 Summer Olympics, Greek armored cruiser Georgios Averof, National Schism, Great Thessaloniki Fire of 1917, Order of battle of the Hellenic Army in the First Balkan War, Balkans Campaign, Albania during the Balkan Wars, Movement of National Defence, Naval Battle of Lemnos, Treaty of Bucharest, Order of battle of the Bulgarian Army in the First Balkan War, Treaty of London, Greece during World War I, Battle of Kilkis-Lahanas, Order of battle of the Serbian Army in the First Balkan War, The Destruction of Thracian Bulgarians in 1913, Battle of Sarantaporo, Maurice Sarrail, Naval Battle of Elli, Treaty of Athens, French military mission to Greece, Battle of Pente Pigadia, Greek legislative election, December 1915, Battle of Skra-di-Legen, Treaty of Constantinople, Greek legislative election, May 1915, Battle of Yenidje, Battle of Sorovich, Report of the International Commission on the Balkan Wars, Greek legislative election, November 1910. Excerpt: The First Balkan War, which lasted from October 1912 to May 1913, pitted the Balkan League (Serbia, Greece, Montenegro and Bulgaria) against the Ottoman Empire. The combined armies of the Balkan states overcame the numerically inferior and strategically disadvantaged Ottoman armies and achieved rapid success. As a result of the war, almost all remaining European territories of the Ottoman Empire were captured and partitioned among the allies. Ensuing events also led to the creation of an independent Albanian state. Despite its success, Bulgaria was dissatisfied over the division of the spoils in Macedonia, which provoked the start of the Second Balkan War. Tensions among the Balkan states over their rival aspirations to the provinces of Ottoman-controlled Rumelia, namely Eastern Rumelia, Thrace and Macedonia, subsided somewhat following intervention by the Great Powers in the mid-19th century, aimed at securing both more complete protection for the provinces' Christian majority and protection of the status quo. By 1867, Serbia and Montenegro had all secured their independence, which was confirmed by the Treaty of Berlin a decade later. But the question of the viability of Ottoman rule was revived after the Young Turk Revolution of July 1908, which compelled the Sultan to restore the suspended Ottoman constitution, and the significant developments in the years 1909-11. Serbia's aspirations towards Bosnia and Herzegovina were thwarted by the Austrian annexation of the province in October 1908. The Serbs then focused their attention to the south for expansion. After the annexation, the Young Turks tried to induce the Muslim population of Bosnia to emigrate to the Ottoman Empire. These immigrants were settled by the Ottoman authorities in those districts of northern Macedonia where the Muslim population was weak. The experiment proved disastrous. Their presence in Kosovo and northern Macedonia proved to be a catastrophe for the Empire since they readily united with the