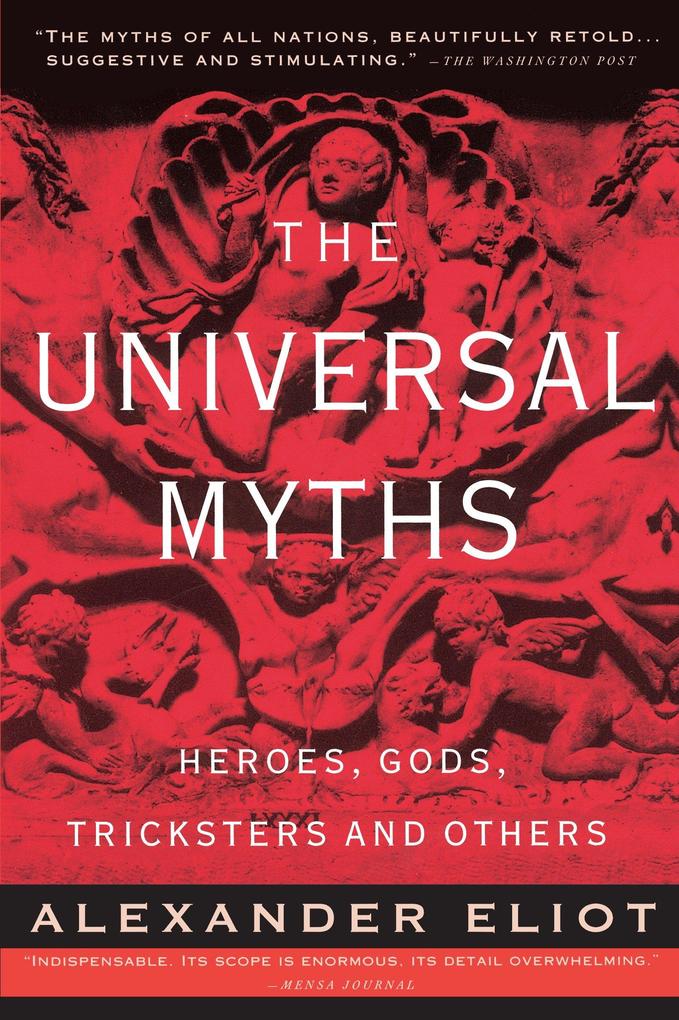 The Universal Myths: Heroes, Gods, Tricksters, and Others

von Alexander Eliot, Joseph Campbell
Sprache: Englisch.
Taschenbuch
Crossing the boundaries of time, region, and culture, universal myths have provided inspiration and guidance for countless generations-laying a foundation for the religious, social, and political heritage of nations and peoples since the beginning of … weiterlesen
Geschenk per Mail versenden
Taschenbuch

Crossing the boundaries of time, region, and culture, universal myths have provided inspiration and guidance for countless generations-laying a foundation for the religious, social, and political heritage of nations and peoples since the beginning of time. Here is a rich and absorbing survey of the common myths that connect all cultures, Eastern and Western, from antiquity to the present day. With stunning power, the stuff of legend is explored in all its drama and magnificence. There are stories of gods and men-and legendary heroes from Zeus to King Arthur to the "Superman" of modern media; tales of heaven, earth, and the origins of man from Hindu, American Indian, and Western thought; and retellings of mythic quests and legendary lovers, from the epic wanderings of Odysseus to the tragedy of Tristram and Iseult and the Krishna marriage of Heaven and Earth. This extraordinary work, compiled and arranged by theme from stories of creation to tales of death and rebirth, examines and compares the world's myths that have shaped our common past and continue to influence us still.

Introduction: The Mythosphere
Creators of Nature and Mankind
Creator Gods
Animals and Creation
The First Couple
The Great Mother
The Greek Gods from Chaos to Zeus
Cosmology
The Structure of the Universe
Mythic Cosmograms
Creation Myths
The Birth of Man
Worlds Above Below and Within
The Light
The Sun
The Way of the Great Light
Sun Worship and Sun Dance
The World and Stars
Heaven and Earth
The Bridge of Heaven
Thunder and Lightning
Demons and Spirits
Yggdrasil
World Tree, Tree of Life, and Tree of Knowledge
The World Mountain
Towers to Heaven
Paradise
The Reaches of Heaven and the Depths of Hell
Bringers of Magic and the Arts
Bringers of Wisdom
Fire - a Gift of the Gods
The Divine Blacksmith
The Healers
Hermes
Shamans: Magicians and Priests
Witches: Disciples of the Devil
Teachers and Leaders
Protectors of the Herd
The Rainmakers
The Fertile Earth
Gods of the Hunt
Fisher Gods
Maui
Animals Monsters and Mythic Beasts
Mythic and Legendary Animals
Creators and Protectors of Animals
Deities of the Nile
Bull Cults
Holy Steeds
Animals in the Sky
Fabulous Creatures, Magic and Demonic
Emblems and Attributes of the Gods
Animals, Deities, and People
The Serpent
Symbols of the Seasons
The Dragon
Lovers and Bearers of Divine Seed
The Great Mother
The Goddess of Love, Aphrodite/Venus
Tragic Love
Orpheus and Eurydice
The White Cow
Miraculous Conceptions
Divine Birth
Mysterious Births of Gods and Heroes
The Goddess of Fertility
Heavenly and Earthly Couples
The God of Love
Krishna and the Marriage of Heaven and Earth
The Loves of Zeus
Compassionate Love
Tantra
Combat in Heaven and on Earth
Heroic Battles Against Monsters
The Labors of Heracles
Shen I, the Cosmic Archer
The Twilight of the Gods
Nordic Warrior Gods
Guardians of the East
The Battle of the Greek Gods
Thor and the Wild Hunt
Sigurd, the Nordic Hero
The Ramayana
Good and Evil
Gods of War
The Trojan War
Mythic Struggles in Defense of Divine Order
Distant Quests and Mortal Tests
Quests and Questers
Odysseus and His Journey
Heroes and Animals
The Round Table
The Holy Grail
Eternal Youth
Theseus, the Hero of Athens
The Benevolent Quest
The Feathered Serpent
The Dragon Slayer
Buddha and the Search for Enlightenment
The Persian Hero Rustam
The Nine Heroines and the Nine Heroes
Death and Rebirth
Realms of the Dead
The Journey to the Underworld
Messengers of Death
The Beyond
Hades, the Greek Underworld
The Tortures of Hell
Dwellers in the Paradise of Heaven
The Triumph of Death
The Last Judgment
The Journey to Paradise
Resurrection and Rebirth
Return from the Underworld
Nirvana
The Rebirth of Light and Life
Select Bibliography
Index

Joseph Campbell was interested in mythology since his childhood in New York, when he read books about American Indians, frequently visited the American Museum of Natural History, and was fascinated by the museum's collection of totem poles. He earned his B.A. and M.A. degrees at Columbia in 1925 and 1927 and went on to study medieval French and Sanskrit at the universities of Paris and Munich. After a period in California, where he encountered John Steinbeck and the biologist Ed Ricketts, he taught at the Canterbury School, then, in 1934, joined the literature department at Sarah Lawrence College, a post he retained for many years. During the 1940s and '50s, he helped Swami Nikhilananda to translate the Upanishads and The Gospel of Sri Ramakrishna. The many books by Professor Campbell include The Hero with a Thousand Faces, Myths to Live By, The Flight of the Wild Gander, and The Mythic Image. He edited The Portable Arabian Nights, The Portable Jung, and other works. He died in 1987.