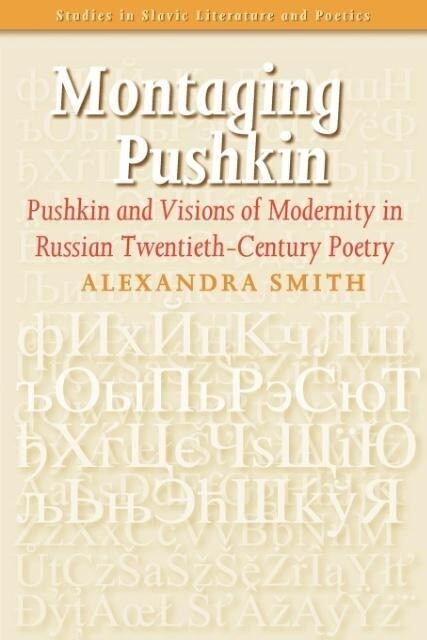 von Alexandra Smith
Sprache: Englisch.
Taschenbuch
Montaging Pushkin offers for the first time a coherent view of Pushkin's legacy to Russian twentieth-century poetry, giving many new insights. Pushkin is shown to be a Russian forerunner of Baudelaire. Furthermore it is argued that the rise of the Ru … weiterlesen
Geschenk per Mail versenden
Taschenbuch

Montaging Pushkin offers for the first time a coherent view of Pushkin's legacy to Russian twentieth-century poetry, giving many new insights. Pushkin is shown to be a Russian forerunner of Baudelaire. Furthermore it is argued that the rise of the Russian and European novel largely changed the ways Russian poets have looked at themselves and at poetic language; that novelisation of poetry is detectable in the major works of poetry that engaged in a creative dialogue with Pushkin, and that polyphonic lyric has been achieved. Alexandra Smith locates significant examples of Pushkin's cinematographic cognition of reality, suggesting that such dynamic descriptions of Petersburg helped create a highly original animated image of the city as comic apocalypse, which followers of Pushkin appropriated very successfully even as far as the late twentieth century. Montaging Pushkin will be of interest to all students of Russian poetry, as well as specialists in literary theory, European studies and the history of ideas.

"Smith's thesis is both startling and original: that Pushkin, for all his Mozart-like fluidity and perfection, can be productively read as a poet of pain and violence. His reflex was to respond to the totalizing, authoritative public landscape of his era with an equally severe but specifically private, individualizing, disciplined set of demands on the Poet. The recurring attention that later generations have paid toward those aspects of Pushkin's life and texts governed by the private right to resist or to initiate violence (his duel, his struggles with the bureaucracy, his failed pursuit of service with honour) suggest that this mythologeme is among the most productive in Pushkin's astonishing legacy"
CARYL EMERSON (A. Watson Armour III University Professor of Slavic Languages and Literatures, Chair of the Slavic Department, Professor of Comparative Literature at Princeton University)

"Smith's innovative study offers a wonderful analysis of how cinematographic editing and polyphony are detected in Russian twentieth-century poetry... It views Pushkin as a "référence obligée" of contemporary urban poetry"
VÉRONIQUE LOSSKY (Professor Emeritus of Russian Literature at the Université de Paris-Sorbonne IV)

Dr Alexandra Smith graduated from St Petersburg's Herzen Pedagogical University and was awarded her PhD at the University of London's School of Slavonic and East European Studies. She has taught at the University of Essex and at the University of Bristol, and currently is Senior Lecturer in Russian at the University of Canterbury. She authored the book The Song of the Mockingbird: Pushkin in the Work of Marina Tsvetaeva (Peter Lang, 1994) and has published over 130 articles in Europe, Russia, USA and Australasia on Pushkin, Russian modernism and postmodernism, and Soviet and European literature. Her recent publications include nine essays on Russian emigre authors (in: Rubins, Maria, editor. Dictionary of Literary Biography: Twentieth-Century Russian Emigre Writers, A Bruccoli Clark Layman Book, Thomson-Gale, 2005).