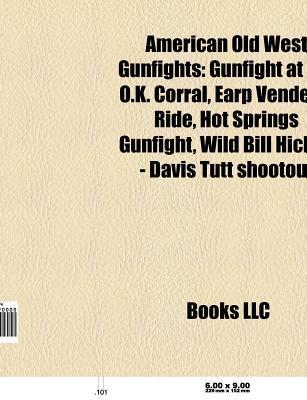 Source: Wikipedia. Pages: 41. Chapters: Gunfight at the O.K. Corral, Earp Vendetta Ride, Shootout on Juneau Wharf, Hot Springs Gunfight, Wild Bill Hickok - Davis Tutt shootout, Vaudeville Theater Ambush, Goingsnake Massacre, Battle of Lincoln, Four Dead in Five Seconds Gunfight, Gunfight of Blazer's Mills, Battle of Ingalls, Gunfight at Hide Park, Guadalupe Canyon Massacre, Skeleton Canyon Massacre, Frisco Shootout, Long Branch Saloon Gunfight, Variety Hall Shootout, Hunnewell, Kansas Gunfight, Luke Short - Jim Courtright duel. Excerpt: The Gunfight at the O.K. Corral was a roughly 30-second gunfight that took place at about 3:00 p.m. on October 26, 1881 in Tombstone, Arizona Territory of the United States. Although only three men were killed during the gunfight, it is generally regarded as the most famous gunfight in the history of the Old West and has come to symbolize the struggle between legal authority and outlaws during an era where law enforcement was often weak or nonexistent. The gunfight was relatively unknown to the American public until 1931 when author Stuart Lake published what has since been determined to be a largely fictionalized biography, Wyatt Earp: Frontier Marshal, two years after Wyatt's death. Lake retold his story in 1946 in a book that director John Ford developed into the movie My Darling Clementine. After the movie Gunfight at the O.K. Corral was released in 1957, the shootout came to be known by that name. The conflict has since then been portrayed with varying accuracy in numerous Western films and books. Despite its name, the gunfight began in a 15-20 feet (4.6-6.1 m) wide empty lot or alley on Fremont Street, between C. S. Fly's lodging house and photographic studio and the MacDonald assay house. The lot was six doors east of an alleyway that served as the O.K. Corral's rear entrance. The two opposing parties were initially only about 6 feet (1.8 m) apart. About thirty shots were fired in thirty seconds. Ike Clanton and Billy Claiborne ran from the fight, unharmed. Frank and Tom McLaury and Billy Clanton were killed; Morgan Earp, Virgil Earp, and Doc Holliday were wounded and survived. Ike Clanton filed murder charges against Doc Holliday and the Earps and after a month-long preliminary hearing they were exonerated. The Earps and Doc Holliday were charged by Billy Clanton's brother, Ike Clanton, with murder but were eventually exonerated by a local judge after a 30-day preliminary hearing and then again by a local grand jury. The so-called cowboy faction allegedly ta