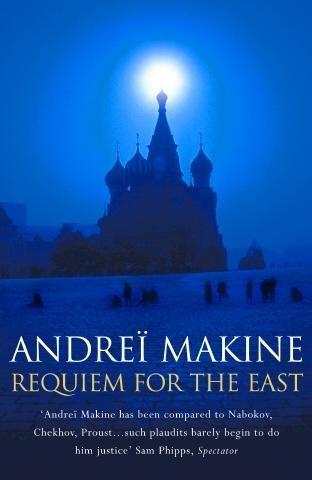 Requiem for the East

von Andrei Makine
none. Sprache: Englisch.
Taschenbuch
A magnificent, elegiac novel spanning the history of Russia through the tumultuous 20th century, from the only writer ever to have won both the Prix Goncourt and the Prix Medicis

A magnificent, elegiac novel spanning the history of Russia through the tumultuous 20th century, from the only writer ever to have won both the Prix Goncourt and the Prix Medicis

Andreï Makine was born in Siberia in 1957, and taught at the University of Novgorod. In 1987 he left the Soviet Union and sought asylum in Paris, where he lived rough before finding teaching work. He is the author of LE TESTAMENT FRANCAIS, the unprecedented winner of both the Prix Goncourt and Prix Médicis and an international bestseller, which was followed by THE CRIME OF OLGA ARBYELINA (Sceptre 99). CONFESSIONS OF A LAPSED STANDARD-BEARER, his second novel, was published in English by Sceptre in 2000.

'A beautifully written, all-engrossing, compassionate elegy for a dying empire. I cannot think of a book I have enjoyed more in the past year.' -- Toby Clements, Daily Telegraph 'A novel remarkable for its combination of grandeur and extreme concision ... [a] memorable depiction of a Dostoevskian world of good, evil and the ever-present possibility of redemption ... an awesome achievement, head and shoulders above any novel that I have read so far this year' -- Francis King, Literary Review 'A luminous, beautifully crafted new novel by much-praised Russian emigre author Makine ... Each temporal leap the novel makes illuminates and defines its crucial events ... Makine writes lyrically, baring his struggling characters' emotions and vivifying their oft-chaotic backdrops with equal brio. The arc of the novel shows, above all, that life patterns repeat themselves; we watch the same conflicts playing themselves out in three life stories ... Displays the sensitivity and honesty of his acclaimed previous works.' -- Publishers Weekly (starred preview) 'Makine's eye for the telling detail of battle or the first stirring of romance is reminiscent of Michael Ondaatje' -- Tim Adams, Observer 'Makine has already established his readership. Powerful and intelligent, Requiem for the East, with its elegiac evocation of a past age, should extend that readership still further.' -- Alastair Sooke, Times Literary Supplement 'A powerful, passionate piece, epic in scope' -- David Robson, Sunday Telegraph 'Subtly allusive and deceptively lyrical ... Makine manages the different strands of the story with great skill' -- Robin Buss, Independent on Sunday 'A major writer in the grand tradition of European literature, to which few, if any, contemporary English novelists can ever hope to belong' -- Sebastian Shakespeare, Literary Review [Once Upon 'This book is a requiem for many things: not only for the Soviet Union but for love found and lost, for identity and truth' -- The Good Book Guide, London 'A slow burner, this - but burn it does ... the result is a requiem indeed, with all its beauty tied up in sadness.' -- Guardian 'Engrossing ... a compassionate elegy for a dying empire.' -- Telegraph Summer Reading Paperback Choice