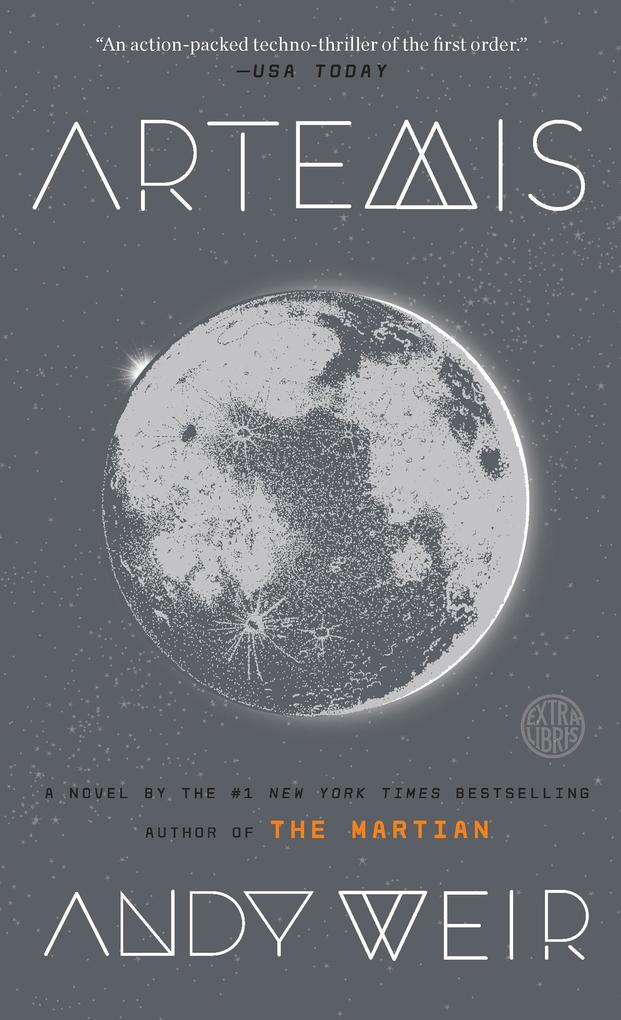 Jasmine Bashara never signed up to be a hero. She just wanted to get rich.

The bestselling author of The Martian returns with an irresistible new near-future thriller-a heist story set on the moon.

Jasmine Bashara never signed up to be a hero. She just wanted to get rich.

Not crazy, eccentric-billionaire rich, like many of the visitors to her hometown of Artemis, humanity's first and only lunar colony. Just rich enough to move out of her coffin-sized apartment and eat something better than flavored algae. Rich enough to pay off a debt she's owed for a long time.

So when a chance at a huge score finally comes her way, Jazz can't say no. Sure, it requires her to graduate from small-time smuggler to full-on criminal mastermind. And it calls for a particular combination of cunning, technical skills, and large explosions-not to mention sheer brazen swagger. But Jazz has never run into a challenge her intellect can't handle, and she figures she's got the 'swagger' part down.

The trouble is, engineering the perfect crime is just the start of Jazz's problems. Because her little heist is about to land her in the middle of a conspiracy for control of Artemis itself.

Trapped between competing forces, pursued by a killer and the law alike, even Jazz has to admit she's in way over her head. She'll have to hatch a truly spectacular scheme to have a chance at staying alive and saving her city.

Jazz is no hero, but she is a very good criminal.

That'll have to do.

Propelled by its heroine's wisecracking voice, set in a city that's at once stunningly imagined and intimately familiar, and brimming over with clever problem-solving and heist-y fun, Artemis is another irresistible brew of science, suspense, and humor from #1 bestselling author Andy Weir.

Andy Weir built a career as a software engineer until the success of his first published novel, The Martian, allowed him to live out his dream of writing fulltime. He is a lifelong space nerd and a devoted hobbyist of subjects such as relativistic physics, orbital mechanics, and the history of manned spaceflight. He also mixes a mean cocktail. He lives in California.

An action-packed techno-thriller of the first order the perfect vehicle for humans who want to escape, if only for a time, the severe gravity of planet earth. The pages fly by. USA Today

Revitalizes the Lunar-colony scenario, with the author s characteristic blend of engineering know-how and survival suspense...Jazz is a great heroine, tough with a soft core, crooked with inner honesty. Wall Street Journal

Smart and sharp Weir has done it again [with] a sci-fi crowd pleaser made for the big screen. Salon.com

Weir has done the impossible he s topped The Martian with a sci-fi-noir-thriller set in a city on the moon. What more do you want from life? Go read it! Blake Crouch, New York Times bestselling author of Dark Matter

Everything you could hope for in a follow-up to The Martian: another smart, fun, fast-paced adventure that you won t be able to put down. Ernest Cline, New York Times bestselling author of Ready Player One

An exciting, whip-smart, funny thrill-ride one of the best science fiction novels of the year. Booklist (starred review)

Narrated by a kick-ass leading lady, this thriller has it all a smart plot, laugh-out-loud funny moments, and really cool science. Library Journal (starred review)

Praise for The Martian:

Brilliant a celebration of human ingenuity [and] the purest example of real-science sci-fi for many years. Wall Street Journal

A marvel Robinson Crusoe in a space suit. Washington Post