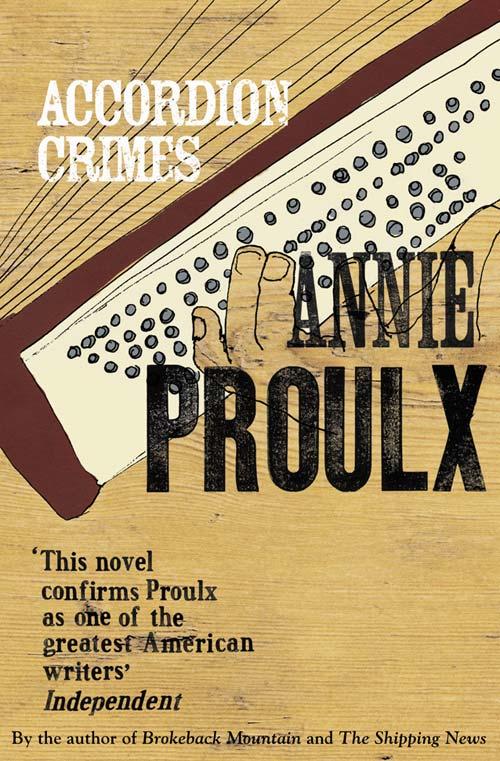 New paperback from the author of the prize- winning "The Shipping News, Postcards" and "Heart Songs". This masterpiece begins in Sicily in 1890. An accordion maker and his son journey to New Orleans with little more than his finest button accordion. Within a year the accordion maker is dead, but the story continues as his accordion is passed from one immigrant community to another - Mexicans, Poles, Germans, Irish, Scots and French-Canadians.

Annie Proulx published her first novel 'Postcards' in 1991 at the age of 56. 'The Shipping News' won the Pulitzer Prize for Fiction, the National Book Award and the Irish Times International Prize. Her third novel, 'Accordion Crimes', was published in 1996. She is also the author of three short-story collections, 'Heart Songs' (1994), 'Close Range' (1999) and 'Bad Dirt' (2004). 'Brokeback Mountain' was made into an Oscar-winning film in 2005. 'Fine Just the Way It Is', her third collection of Wyoming short stories, was published in 2008.

'This novel confirms Proulx as one of the greatest American writers.' Independent 'The detail is breathtaking, her ear for dialogue matchless, her observation unsentimental, her pace infectious. She tackles death, sex and the gruesome with black hilarity and the skills of a born storyteller. Rich and dense, "Accordion Crimes" is a splendid novel.' The Times 'Annie Proulx has written an epic social history of America and the plight of the immigrant, which is astonishing in its breadth, heroic in the scale of its ambition and brilliant in its manner of realising them.' Daily Mail 'The glorious richness of the language continually makes you pause in wonder, the details pile up and surround you.' Scotsman 'Her range and scope are tremendous, shuttling through the warp of multiple cultures and spanning, by the end, a hundred years. And it is the range of detail that grips, richly concrete.' Spectator 'Vigorous, salty and extraordinary.' The Times