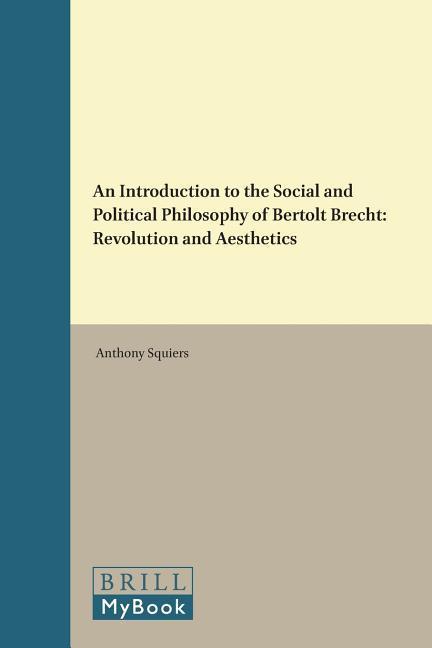 An Introduction to the Social and Political Philosophy of Bertolt Brecht: Revolution and Aesthetics

Titel: An Introduction to the Social and Political Philosophy of Bertolt Brecht: Revolution and Aesthetics
Autor/en: Anthony Squiers

An important and comprehensive presentation of the social and political thought of Bertolt Brecht. Squiers argues that Brecht, the well-known poet and dramatist, should also be considered a social and political thinker in his own right. Relying on close readings of Brecht's poems, plays, stage directions and other writings, Squiers reveals the theoretical significance of Brecht's distinctive account of "praxis" as well as his critique of instrumental rationality. This is a truly interdisciplinary work that speaks to political and critical theorists as well as to scholars of contemporary literature and theatre. -Emily Hauptmann, Ph.D. Western Michigan University Squiers' monograph makes the case that Brecht is the Missing Link in Western Discourse, the link that connects philosophy to literature to theater to politics to common sense...[It] is an important contribution to Brecht scholarship and follows a tradition established by Roland Barthes and extended by Fredric Jameson...Barthes, Jameson, and Squiers see Brecht and don't stare at him (Glotzen ist nicht Sehen!). This Trinity sees a type of Socrates Complex, a Socratex if you will, i.e. an entity (Brecht) that navigates, mediates, illuminates the most important ideas, philosophies, ideologies, histories, mythologies, and theories of the Western Mind without trying to make Brecht into some type of commodity, or answer. This is a difficult and necessary measure, but Squiers pulls it off with critical rigor in a lucid, cohesive, and engaging intellectual-writing style. Squiers "re-discovers" a Brecht that we desperately need and makes it look easy...dialectically speaking. -Norman Roessler, Ph.D. Temple University

Anthony Squiers is a Lecturer and Post-doctoral Researcher at the Universitat Passau.

Taschenbuch
The Subject of Aesthetics: A Psychology…
von Tone Roald

Taschenbuch
In Quest of the Self: Masquerade and…
von Jakub Lipski

Schreiben Sie eine Bewertung für: An Introduction to the Social and Political Philosophy of Bertolt Brecht: Revolution and Aesthetics